Would one-game weekends improve the BBL?

Although the Christmas break is almost upon us, the fixture list in the second half of the season always presents greater challenges – so, last week, we asked – would the BBL be better if clubs only had to play one game per weekend? 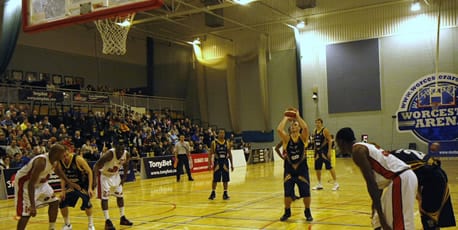 Although the Christmas break is almost upon us, the fixture list in the second half of the season always presents greater challenges – so, last week, we asked – would the BBL be better if clubs only had to play one game per weekend?

For fans of football and rugby, playing twice over a weekend is incomprehensible, yet in basketball and ice hockey, for instance, teams regularly play twice over the weekend, as they look to fulfil demanding fixture lists.

Naturally, after a tough game on the Friday night, it’s always going to be harder to pick yourself up for a Saturday night game, than it would be if it was a stand alone game. But is there anything that can be done about it?

If basketball wants to retain its professional status, then clubs need to maximise the revenue opportunities available to them. If this means playing at home every single week, then it needs to happen. But looking at it from the other angle, can fans afford to pay to watch every single week?

@dougytheeagle on Twitter: “disagree, would be 1 long season if it was 1 game a week, could clubs afford with not havin a home game near enough every week?”

I think we all agree that it’s not feasible for clubs to play just one game a week throughout the season. But is there scope to introduce midweek fixtures?

Maybe basketball could become a “Thursday night thing” and teams could play Thursday-Sunday each weekend. The most local games to each team could be played on the midweek nights, with longer travels taking place on the Sunday.

Chadwick9 on Twitter: “I think 2 games is sometimes a good thing however I think they should not have someone play in Plymouth and then Newcastle etc”

Perhaps another way around it would be to double-up away games – so, Plymouth should play Newcastle and Durham away in the same weekend, to minimise their travelling costs, and also help the players’ recovery. It becomes an issue when a team is expected to play in Newcastle and then travel down to Plymouth a few nights after.

Is quality a priority? Or is it more of a case that sustainability will always take precedence over quality. With sustainability, quality can come naturally.

CarsonWishart on Twitter: “Worcester Wolves’ Sherrard Prezzie-Blue says he finds the two-game weekend physically tough, but the players have to deal with it.”

So, consensus there is one game per weekend would help increase quality, but generally, it is not feasible for clubs to do that, especially as it would extend the season even further, which would rack up further costs for the clubs, such as travel, accommodation, player wages etc.

Are teams struggling with two games a weekend anyway?

Rofticelli on Twitter says: “If you look at the stats the only team struggling with two games in a weekend is the Heat, who haven’t won this season anyway.”

There’s even the argument that players would prefer more games, rather than simply a week full of practice.

Proud_Geordie_ on Twitter says: “I’m sure the players in #theBBL would prefer more games then practice even though the back to back games are tough.”

Another interesting point is that of rented arenas. Sometimes, clubs are held to ransom by their landlords and can only play on certain nights, or maybe can only afford to play a certain number of games due to the costs.

Chadwick9 on Twitter says: “I think once teams have their own venues (or reduced rental) they will be able to afford a busier schedule.”

And it seems that venues could be what prevents any midweek experiments.

BasketballViews on Twitter adds: “As much as one game week would be nice – better would be a mid-week game + a weekend game. They do it elsewhere.(I know, no venues)”

So while back-to-back game nights isn’t ideal, it doesn’t appear that there is a feasible solution – not at this stage anyway. What do you think? Add your comments below.