Worcester Wolves will be mightily pleased to have secured back to back wins over the weekend, ahead of next Saturday’s big BBL Cup semi-final first leg versus the Plymouth Raiders. 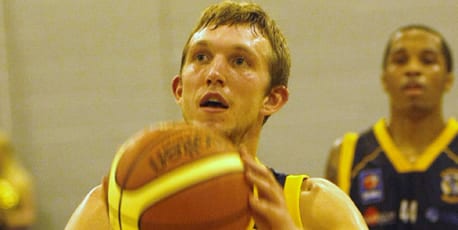 Worcester Wolves will be mightily pleased to have secured back to back wins over the weekend, ahead of next Saturday’s big BBL Cup semi-final first leg versus the Plymouth Raiders.

On Saturday evening the Wolves repelled the challenge of a plucky Mersey Tigers side, and then on Sunday afternoon did enough to see off a Guildford Heat team reinvigorated by several new arrivals.

After releasing three of their original American signings in order to pick up new point guard Drew Lasker, formerly of the BBL winning Newcastle Eagles, forward Mike Copeland from the Glasgow Rocks, and one-time Wolves forward Shaun Durant, hopes were high for the new look Heat.

The final 98-93 Wolves victory only came about at the end of a game which continually see-sawed in favour of either side.

Two quick baskets from Lasker took his team into a very early 4-0 lead. A long-range score from Tommy Freeman, and a drive to the hoop from Carlos Fernandez pushed Wolves 5-4 ahead.

The rest of the quarter featured an explosion of scoring from both teams that ended with Wolves ahead at 31-27, after a brace of scores from outside the arc for Arnas Kazlauskas, and a trio of similar scores by Wolves’ point guard Sherrad Prezzie Blue.

Whilst Kazlauskas continued to prove deadly from the outside in the second period, Richie Gordon was able to rattle up four quick scores on the inside, including a powerful dunk over the Heat defenders midway through the period.

With just 37 seconds left in the half Wolves’ spirits were dampened when Gordon reached in on the arm of Lasker for his third foul of the afternoon.

A slender 51-49 interval advantage for the Wolves evaporated after only a minute when young Heat guard Tayo Ogedengbe sank two foul shots, and Copeland hit from distance.

After five minutes had elapsed Gordon had picked up a further foul and was obliged to take a seat on the Worcester bench. Shortly afterwards, a brief altercation with Heat’s Julius Joseph caused Kazlauskas to be called for an unsportsmanlike foul with Guildford making the resultant free throws to take a 70-64 lead.

Going into the final quarter trailing 72-78, it looked like the previous night’s exertions were taking their effect on the Wolves. When veteran guard Dean Williams entered play and scored an unchallenged basket from his first touch of the ball, the Heat led 85-78.

At four minutes remaining in the contest the visitors trailed 84-87, but then benefited from a technical foul awarded against Heat coach Creon Raftopolous for disputing how much time one of his attackers was allowed to spend in the Wolves paint. Freeman made both bonus shots, and followed these by floating home his fourth three-point score of the match to move his side in front at 89-87.

Neither side was able to deliver the killer blow until 41 seconds remaining, when Freeman stood ramrod straight in front of the oncoming Martelle McLemore, causing his opponent to be called for an offensive charging foul.

Once shots from Copeland and Joseph had both gone astray, the Heat were forced to foul to stop the clock, but were unable to prevent the final 98-93 Wolves victory.
At the conclusion of the game jubilant Worcester players leapt into the middle of a large band of travelling Wolves supporters to celebrate the triumph.

Prezzie-Blue led the Wolves scorers with 24 points, closely followed by Freeman and Gordon with 23 points apiece. Lasker scored highest for the Heat with 22 points.
Tommy Freeman reflected on completing a double of impressive showings, having also scored 30 points in the 93-84 victory over Mersey: “I took it upon myself to be more aggressive. I drew some fouls and built my offence from there.”

Worcester Director of Basketball Paul James admired his team’s resilience: “I’m really proud of the boys tonight. We were running on empty a little bit, but it was still a big performance.”

Despite the defeat, Heat coach Creon Raftopolous was still able to praise the victors: “Credit to Worcester. They made the three point shots when it counted, and pushed home their advantage over us in having had the time to develop their cohesion.”