Worcester make it six in a row

Worcester Wolves followed up Friday’s 92-61 win at Mersey Tigers, by eventually seeing off the challenge of the Durham Wildcats at the University of Worcester on Saturday. 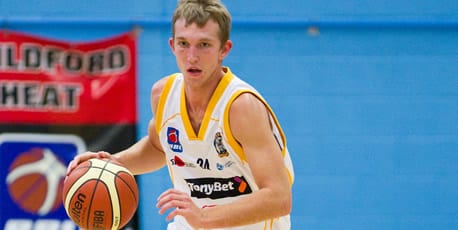 Worcester Wolves followed up Friday’s 92-61 win at Mersey Tigers, by eventually seeing off the challenge of the Durham Wildcats at the University of Worcester on Saturday.

A Wolves side that often appeared to be carrying the effects of the previous night’s exertions struggled to fend off their plucky opponents, only securing the 65-64 victory after a hectic final few minutes.

At midway through the opening quarter the Wolves trailed at 3-8. By the close of the period the home side were still in arrears at 13-21.

One player who had no early difficulties was 6 foot 9 inch Richie Gordon who was consistently able to power home scores close to the basket, on the way to 12 first-half points. Meanwhile small forward Tommy Freeman was also in fine form for the second night running, slicing through the Wildcats defence or scoring from the outside. A Freeman three-pointer tied the scores at 25-25 with four minutes remaining, with a made jump shot when falling down giving his team their first lead at 27-25 moments later.

Worcester continued to ease away from Durham when Spanish forward Carlos Fernandez stole the ball and slammed in a breakaway score for a 35-28 advantage.

A 37-29 half-time lead was extended to 52-41 towards the end of the third period, following a Gordon block and long assist to Sherrad Prezzie-Blue for a neat layup. As the quarter drew to a close Wildcats’ veteran guard Ralph Bucci finally found his range from distance, reducing the Wolves lead to 52-45.

Wolves once more pulled clear of their visitors at 56-45 when Freeman took a charge under his own basket and nailed consecutive scores. However a Durham side with their confidence buoyed by their come-from-behind victory against Cheshire Jets the previous weekend were not ready to succumb. A second Bucci score from outside the arc tied the scores at 58-58 with four minutes left in the contest.

A neat Fernandez shot from the corner took the Wolves ahead at 60-58, only for Durham forward Mike Capocci to float home a long range score for his side to take the lead at 61-60.

Concerned Wolves coach Paul James called a time out, drawing up a play that Lithuanian Arnas Kazlauskas was able to convert. Only a minute remained when David Watts made one of two free throws to take the Wolves ahead at 63-61. Nevertheless Worcester’s cushion once more disappeared as Durham quickly re-took the lead following another Capocci three-pointer.

A long two point basket from Watts regained the advantage for the Wolves at 65-64 with 27 seconds to go. Durham had a shot to win the game which rimmed out, and a scramble under the basket ensued before Richie Gordon grabbed the decisive rebound and secured the victory for the hosts.

Worcester Director of Basketball Paul James was relieved to take the spoils:

“Durham are a well-coached team and will cause a lot of teams problems this season. We were visibly tired from last night’s game at Mersey Tigers and ran out of gas a bit in the fourth quarter, so I’m glad we have come away from the weekend unscathed.”

Meanwhile Durham coach Dave Elderkin was disappointed to see his side pipped at the post:

“Credit to my guys: we had a real go in the second half. But for a bit of luck at the end when the ball bounced around we could have sneaked a win.”

Freeman led the Worcester scorers with 21 points, supported by Prezzie-Blue and Gordon with 12 points apiece. Capocci top-scored for Durham with 19 points.

Wolves will once more face games on consecutive nights next weekend when they return to Mersey Tigers on Friday, before returning to the University of Worcester on Saturday to take on Plymouth Raiders.