While the Worcester Wolves organisation is in bubbly mood about the club’s best ever start to a season, and about the biggest match yet in their history this weekend against Plymouth Raiders, Wolves fans are also finding it difficult to contain their excitement. 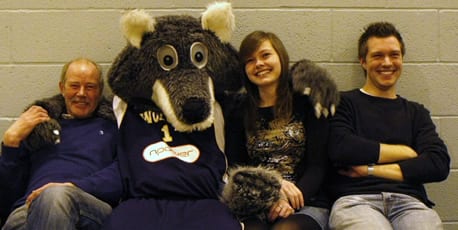 While the Worcester Wolves organisation is in bubbly mood about the club’s best ever start to a season, and about the biggest match yet in their history this weekend against Plymouth Raiders, Wolves fans are also finding it difficult to contain their excitement.

A coachload of supporters made the journey down to Surrey on Sunday to urge Wolves to a 98-93 victory over Guildford Heat, and those fans and many others will be packing the bleachers at the University of Worcester for this Saturday’s semi-final.

Formed in 2000, the Wolves tasted success at the lower levels as they climbed the tiers of British basketball. However, since stepping up to the top-flight of the game, the good times have yet to really roll. Nevertheless the club has always attracted a hard-core of support, and are hoping that recent successes will add to those numbers.

One fan who has followed the Wolves since their formation is Jan Clarke. Jan realises what Saturday means for the franchise:” It’s important for this club to win some silverware at last. These players all play for each other; it’s a real team effort.”

When asked what people who might be considering coming to a Wolves game for the first time can expect, Jan replied: “It’s proper family entertainment. It’s a fast-paced game, and the noise we make is really exciting and all the players really appreciate the interaction they have with the fans.”

Another ardent Wolves supporter, albeit one who only first came to a Wolves match relatively recently, is Andy Johnston. Andy is succinct when he talks about what will happen against the Raiders: “We’ve beaten them twice before, and we’ll thrash them!”

Andy talked about how he got into the Wolves: “I took my two young boys along to a game, and soon we all got hooked and now have season tickets.” Andy was once more straight to the point when asked what anyone contemplating coming down to the University on Saturday should do: “Get your tickets while you can, before they all run out!”

One young follower of the Wolves is Ed Zygaitis. Ed hails from Lithuania, a hotbed of European basketball where games are often watched by several thousand spectators, and thinks that type of passionate support will also be in evidence this weekend: “The support from everyone will be big, and the match should be great.”

Anyone who is still undecided about what they are going to do with themselves this Saturday evening should consider being a part of the Worcester Wolves experience. Just be aware that you might find yourself hooked.