Worcester have confirmed the return of Lithuanian veteran Arnas Kazlauskas. 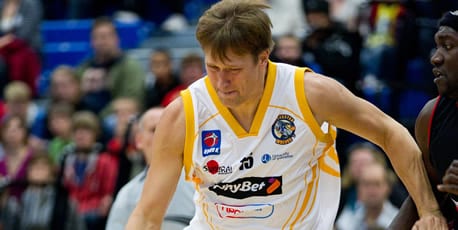 Worcester have confirmed the return of Lithuanian veteran Arnas Kazlauskas.

The 36-year-old becomes the third member of last season’s Wolves team, that finished third in the BBL, to come back for the 2012/13 season.

Director of Basketball Paul James said: “Arnas is part of the backbone of our team. He’s played at a high level in Europe and last year showed everyone that he can still play to a very good standard. He reads the game so well and alongside Prezzie-Blue will provide leadership to our side.”

Kazlauskas follows Sherrad Prezzie-Blue and Carlos Fernandez is in committing to the Wolves for the new campaign, which gets underway on September 21st.

The 6 foot 9 inch forward combined playing for the Wolves with studying at the University of Worcester.

He said: “I made the decision to return because it is a great opportunity to study for my Master’s degree at the University and to play basketball at the same time.

“In addition, I enjoyed working with Paul James and Worcester is a great city that I really want to come back to.”