Worcester Wolves completed their double header weekend with a comfortable win over the Glasgow Rocks at Worcester University with an end score of 87-65. 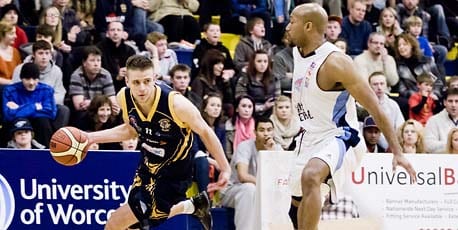 Worcester Wolves completed their double header weekend with a comfortable win over the Glasgow Rocks at Worcester University with an end score of 87-65.

It was a case of continuing from where they left off – Wolves came out of the blocks with determination against the Glasgow Rocks. Richie Gordon was dominating the game under the basket from the tip-off and Tommy Freeman and Arnas Kazlauskas hit big threes as the home team took control of the game. Rocks seemed to have traveled with few knocks on their roster, with E.J Harrison sitting out the game, Mychal Green having a bandage on his hand and to add to the list Andrew Wedemire seemed to get knock during the second half of the game. The narrow roster was something that the home team was taking advantage of as they kept on pushing the game and pace – to keep Rocks always on the move.

Wolves were up by nine points by the end of the opening 10 minutes, and a good run in the opening minutes of the second quarter saw the gap reach 19 points at best, with Carlos Fernandez and Callum Jones scoring from inside to push the advantage.  Rocks were given a life-line into the game after Wolves time-out with 5 seconds left in the half, Rocks worked the ball to Mychal Green who sunk a long three pointer to bring the gap to 11 points as the teams headed for the break.

Rocks came out to the second twenty of the game full of energy, lifting the defensive line and pressing the Wolves back court seemed to bring results early on with Wolves losing possession at the attacking end couple of times. But Wolves took control of the game quickly again with perfectly times long range shots from David Watts and Sherrad Prezzie-Blue. The knock to Wedemire restricted him to only eight minutes in the second half – despite of which he ended the game as Rocks top scorer with 18 points.

Home teams game showed no effects from the long travel to Newcastle and back just 20 hour ago, and with the lead topping at 22 points, coach Paul James had a chance to give on court time to the whole of his roster. Same was true on the other bench as the clock ticked down and gap still persisting at over 20 points, Sterling Davis took his starting five to the bench and gave time to Greg Richards, Jonny Bunyan and Martins Malnieks.

As the game ended the home team was celebrating in the centre circle with their fans showing appreciation to the team who had just completed a tough double-header weekend and came home with four points from two games and thus consolidating their place in the BBL Championship table, right behind Newcastle Eagles. Rocks now will spend a night in a hotel at Bristol Airport before traveling down to play Plymouth on Sunday, for the Wolves it is time for their Christmas break before they welcome Leicester Riders to Worcester on the 28th of December.

Top scorers in the game, for Wolves : Tommy Freeman with 23 points, and double-double for Richie Gordon 18 points/11 rebounds. Rocks : Andrew Wedemire with 18 points and Mychal Green with 13 points.