Wolves back on track after Tigers win

Worcester Wolves bounced back from a couple of recent defeats by seeing off Mersey Tigers 93-84 on Saturday night, and, in the process, moving into joint-second place in the BBL Championship. 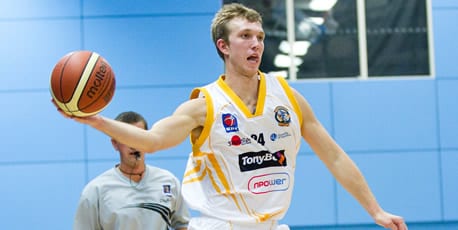 Worcester Wolves bounced back from a couple of recent defeats by seeing off Mersey Tigers 93-84 on Saturday night, and, in the process, moving into joint-second place in the BBL Championship.

Despite once more facing an opponent they had dealt with comfortably in two previous encounters this season, this time it was a much less one-sided affair.

Wolves forward Tommy Freeman opened the game with a swaggering score from distance, and just a few seconds later Tigers coach Tony Garbelotto was awarded a technical foul when loudly disputing a refereeing decision. The Tigers woes continued as the home side went into a scoring frenzy.

Freeman slotted home two more long range baskets, and was joined by similar scores from David Watts and Carlos Fernandez. Even a missed free throw from veteran Lithuanian forward Arnas Kazlauskas was slammed back through the hoop by Richie Gordon, aiding his side to take a dominant 30-13 first quarter advantage.

With one eye on the following day’s game at Guildford Heat, Wolves coach Paul James felt confident enough to substitute out four of his usual starters. However this was perhaps too radical a switch in personnel in too short a period of time as the Tigers surged back to reduce the deficit to 33-24 after the first three minutes of the quarter.

Even when the Wolves starters were re-introduced to the court, the damage was already done as Tigers continued to chip away at the Worcester lead, going into the interval break at only 37-43 in arrears.

At the start of the second half Freeman once more shot at the basket from distance, but this time the ball went wide of the hoop. In reply, consecutive three point scores from Tigers forward David Aliu meant that his side had inched even closer to 46-50 after a couple of minutes of the period. Two rare missed dunks from Gordon and another three points from Aliu left Wolves only a single point ahead at 50-49.

At midway through the third quarter Wolves led 55-54 when Gordon was forced to the bench after picking up his fourth foul. However, the loss of their inside force was compensated by the re-awakening of Tommy Freeman. Having scored 12 points in the first quarter, but then going scoreless in the second, Freeman danced his way through the Tigers defenders to float home a wildly improbable score when falling to the ground. A Mersey time out was then called with Wolves ahead at 62-54 with three minutes remaining.

A continuing burst of scoring from Freeman meant that a final quarter lead of 66-60 quickly accelerated to 78-63 with six minutes of the evening remaining.
The night before this game the Mersey Tigers had trailed Chester Jets by 13 points going into the last quarter, but had still managed to eventually secure the win. The belief this must have given them seemed to carry over into this contest as they pulled matters back to 80-75 at four minutes to go, on the back of more accurate shooting from Aliu, supported by strong drives to the basket from their young English forward Myles Hesson.

Once more the Wolves had to up their offence in order to repel their opponents, taking the lead back out to 88-76 after further scores from Watts and Freeman, before winding down to the final 93-84 outcome.

After the game Paul James acknowledged that his team had been in a battle: “We made hard work of the game. I probably made a few too many substitutions in the first half, and that disrupted our rhythm.”

Freeman led all scorers in the match with 30 points. Aliu top scored for Mersey with 27 points.