It was another successful night for the Leicester Riders and Worcester Wolves in the BBL on Saturday as they both continued their successful winning streaks. 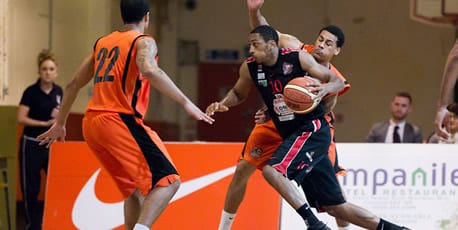 It was another successful night for the Leicester Riders and Worcester Wolves in the BBL on Saturday as they both continued their respective winning streaks.

The two results means that both teams are unbeaten in four games and take a three-way share of the top spot with Newcastle Eagles.

Sherrad Prezzie-Blue scored the winning basket with 18 seconds left in the Wolves single point victory over the Plymouth Raiders edging them 77-76. Meanwhile, the Riders comfortably overcame the Mersey Tigers in a resounding 92-63 success for Rob Paternostro’s side.

In Worcester, Prezzie-Blue finished the night with 24 points matching his opposite number Jeremy Bell in a battle of the point guards.

The Wolves led 17-11 after some early rallying with their opponents but the lead opened up in the second quarter. Prezzie-Blue hit a three pointer to put the Wolves ahead by a double-digit score of 36-25. The Raiders hit back with a 5-2 run with Paul Williams scoring all the points to pull the lead back to 38-30 at the break.

Plymouth continued the momentum in the second half scoring the first eight points and heavily restricting their opponents from scoring. A blistering 14-3 run in the next four minutes saw the visitors lead for the first time on a Bell bucket at 42-41. But the wolves recovered with a 10-2 surge to take control of the game heading into the final stanza.

Midway through the final period, a Ritchie Gordon ‘and one’ play tied the game at 68. He then scored again to take the lead at 71-70.

It was then down to the two point guards. Prezzie-Blue sunk a basket to regain the lead at 76-75 after falling behind with 18 seconds left. Four seconds left on the clock, Bell has a game winning opportunity but unfortunately comes up short on this occasion.

Meanwhile in the East Midlands, the Riders put on a dominant second half display to conquer the Tigers. Cameron Rundles shared the scoring leader board with the Tigers Myles Hesson as they both collected 18 points respectively.

Despite what the scoreline suggests, the first 15 minutes were very close with the two sides separated by no more than four points.

But the riders blew the game wide open in the second half with two blazing runs of scoring led by Rundles and former Tiger Drew Sullivan. The lead reached 28 points with a John Griffin three-pointer before the score climaxed at 92-63 on a Reece Haggith triple.