The Worcester Wolves and Plymouth Raiders have already become very familiar with each other this season having already met on three occasions. This weekend, the pair meet for a fourth time in the first leg of the BBL Cup Semi Final with Worcester looking to gain revenge. 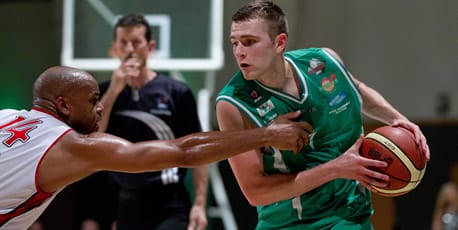 The Worcester Wolves and Plymouth Raiders have already become very familiar with each other this season having already met on three occasions. This weekend, the pair meet for a fourth time in the first leg of the BBL Cup Semi Final with Worcester looking to gain revenge.

The two sides played a two-legged affair like this earlier in the season, in the BBL Trophy, with Plymouth cruising through to the Semi finals of that competition after a comfortable first leg victory.

However, Worcester have been a driving force in the league this month going on an eight game unbeaten run which unfortunately ended earlier this month.

Worcester Head Coach Paul James believes the Wolves are back on track but it is going to be a tough 80 minutes:

‘We’re going to have a great series against them. We have had some great games against them already and both of our teams play very hard, we are very tough.’ He said.

James admitted that he admired the strength of the opposition particularly in the frontcourt: ‘Plymouth are strong in the front court with Colbert, Williams and Rowe and there some of the toughest players in the league so we have to try and match up with them well. Now they’ve got Bell and they are even tougher but it is going to be a great game and we have to learn from our previous games and play better.’

Plymouth shooting guard James Jones is also looking forward to the tie. The Raiders are a different team from the previous campaign with their ability to vary the scoring on the offence. Jones believes that if the Raiders are consistent and play as a team, they can pull off the win.

‘We are a well balanced team, the problem is we haven’t been playing as a team as much as we would like.’ He said.

Jones added: ‘I think that we have so many weapons that people in the team are trying to take it on themselves and win the game for us. We need to realise that we are a well balanced team that has the potential to be successful and that’s how we are going to win games.’

Jones respects the tough opposition the Raiders face and admits they can cause problems. He expressed: ‘Paul James has Worcester well drilled and well coached as they can hit you from a number of different areas. They’ve got some good players but if we focus on our own performance I think we should be in good shape for the 80 minutes.’

Given the experience these two teams have against each other, Wolves coach James believes his men know what they have to do. He said: ‘We’ve beaten them 2/3 times already this year so we know what we have to do against Plymouth. We have our game plans that have been successful so we just have to execute those plays properly in this cup semi final.’

The eagerly anticipated match up is this Saturday so will Worcester’s secret ‘game plan’ work or can Plymouth surprise the Wolves and claw a victory from their grasp once again?