Tim Lewis settling in at Sheffield

Former Essex Pirates chief and Great Britain under-20 coach Tim Lewis says he is enjoying his new role at Sheffield Sharks, despite their recent dip in form. 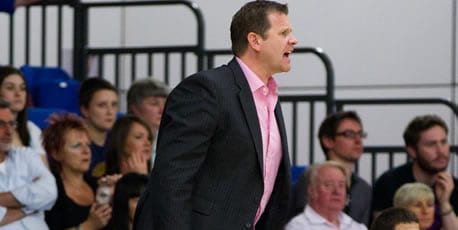 Former Essex Pirates chief and Great Britain under-20 coach Tim Lewis says he is enjoying his new role at Sheffield Sharks, despite their recent dip in form.

After a commanding start to the season that included wins in all four of their BBL Trophy matches, the Sharks have struggled in recent weeks, falling to four consecutive defeats, including a loss in front of the SKY cameras at Glasgow this week.

Lewis said: “It’s going well, it was a pretty smooth transition considering a joined pretty late in the day. I have a consultancy role which involves helping Atiba [Lyons] with the Sharks, working with the University and restructuring the Junior Sharks. The aim is for a performance pathway which provides a link between junior, university and senior basketball in Sheffield.

“It’s a progressive year for Sharks, there’s a different make-up to the team, and we’re finding common ground. We didn’t perform well in Glasgow at the weekend, both individually and as a team, and you can’t expect to go on the road and win games if you play like that.”

The Sharks host in-form Leicester at EIS Sheffield on Friday, with the Riders having won six on the bounce as well as sealing a place in the last four of the BBL Cup.

Lewis added: “Rob has done a good job of putting a group of players together with experience as well as some new faces. They’ve made an impact and it’ll be though. They’ll be there or thereabouts this year, but all games are a challenge and we need to make sure we’re at our best on Friday.

“Drew [Sullivan] is always going to be solid for them, [Cameron] Rundles has done a really good job while Bradd Wierzbicki [pictured] returns and brings an added dimension. They are deep and strong, and will be tough for us.”

Lewis left Essex in the summer when the club opted to leave the BBL on the eve of the season.