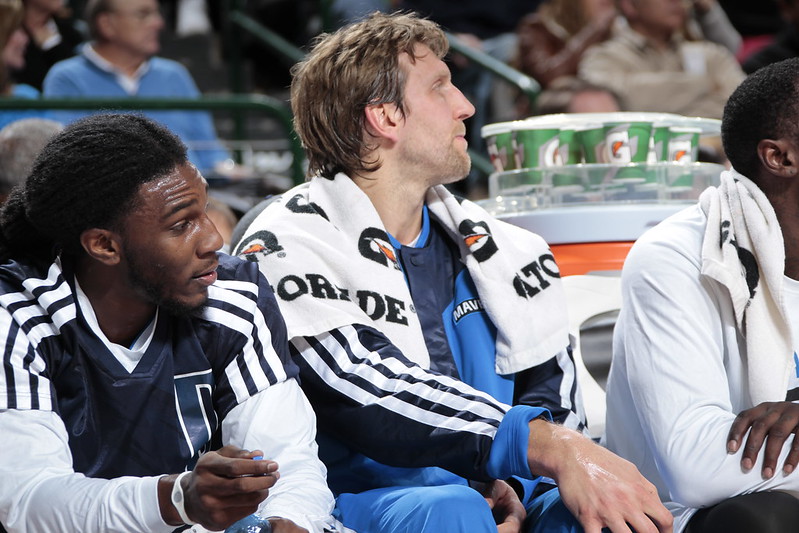 The relationship between NBA and football has been a strong one with plenty of basketball players playing at the highest level of the sport being welcomed over the years to various football teams’ stadiums during games and being given warm receptions by the fans.

The favour is typically returned during the annual NBA Europe games, which usually happen in London but most recently happened in Paris. Still, plenty of football player turned up giving their full support for the NBA stars on show who are also big fans of the sport too. Here are ten NBA superstars who are fans of football clubs.

The most electrifying athlete in the NBA right now, even at the age of 36, LeBron James is not just a big fan of Liverpool, he is also the holder of a 2% stake in the club thanks to his partnership with Fenway Sports Group – who he first got involved with back in 2011 when his stake was only worth £4.7m. Now, LeBron’s stake is estimated to be worth more than £37m, and he also has taken up a more active role withing the company with his business partner Maverick Carter – becoming the first black partners at FSG in the process.

It’s unusual for fans to be so kind to their clubs’ owners, but it’s no surprise that the Liverpool faithful have been so welcoming to the 17-time NBA All Star – and his enthusiastic tweet congratulating the Reds on winning the Premier League last season solidified himself as a hero in Merseyside.

Instead of cash, LeBron James accepted a 2% stake in Liverpool FC as part of a 2011 business deal with Fenway Sports Group.

Lebron is one of the greatest athlete investors of our generation. pic.twitter.com/32CahosAUc

New Orleans Pelicans shooting guard Josh Hart is a huge Chelsea fan too, and regularly tweets support from his official account on Twitter, as well as bantering rivals Tottenham. He has even visited the stadium and swapped shirts with USA international Christian Pulisic, who signed for Chelsea from Borussia Dortmund.

His supposed bad feeling towards Tottenham is something he has adopted thanks to the encouragement by Chelsea fans to do so, but originally Hart didn’t have too much against the North London football team and he even visited the Spurs stadium as well as videoing himself saying “Come on you Spurs”. While his love for Chelsea is strong, his loyalties seem to have taken a swift turn in recent years!

Head Coach of the Brooklyn Nets and former two-time MVP and eight-time All Star Steve Nash is arguably the biggest football fan on this list, being a co-owner at Spanish club RCD Mallorca and MLS franchise Vancouver Whitecaps. However, it is his love for Tottenham Hotspur that is most notable, largely down to his father being born in the Tottenham area of London and having been brought up watching them his entire childhood.

There was a viral clip of Nash back in 2019 running around in a studio with former Bolton Wanderers and USA National Team midfielder Stuart Holden after Tottenham winger Lucas Moura scored his third goal of the night against Ajax to send them through to the Champions League Final. The former Phoenix Suns superstar began to cry tears of joy, cementing himself as a legend among Tottenham fans. Nash has enjoyed multiple visits to North London and as soon as restrictions and his schedule allows him to do so, it’s quite likely he will be back.

.@SteveNash was in tears at full-time of Tottenham's win pic.twitter.com/ifEZEbinYR

The ‘Greek Freak’ Giannis Antetokounmpo actually grew up as a football player and he played all the way through his childhood before he started playing basketball not long before he turned 13. During that time, the Milwaukee Bucks forward who is also a 2x NBA MVP, grew up supporting Arsenal who famously went unbeaten over an entire season on their way to winning a title, as well as finishing runners-up in the Champions League.

Nowadays, Antetokounmpo is more of a supporter of PSG, who have a partnership with Air Jordan, stating that whenever he plays the video game FIFA, he chooses the French club. After having the opportunity to meet global superstars like Neymar, Kylian Mbappe and Marquinhos who all play for the current French champions, it’s unlikely he will return to being a hardcore Arsenal fan anytime soon.

#Giannis Antetokounmpo sounds like he has deserted #AFC here: "I used to support Arsenal when I was a kid. Whenever I play #FIFA, I always play with #PSG. I’m a big fan of #Zlatan." Says he wants to #Neymar ahead of #NBAParis #FearTheDeer pic.twitter.com/Iqbhlt65KE

Dallas Mavericks’ superstar Luka Doncic came to the NBA after starring at Real Madrid’s basketball team, who trained on the same site as the football team did. The Slovenian grew up with all of the football players of his same age class and would practice his skills with them, albeit not quite as good as they were with their feet.

As like many people from Slovenia, Doncic was a very big football fan so to train on the Real Madrid campus was like a dream to him, and he even had the opportunity to travel to the Madrid stadium, Santiago Bernabeu, and watch the games. He has since been back and met up with the likes of one-time Ballon d’Or winner Luka Modric – who he was one time compared to by a commentator after he received his second technical in a game for accidentally kicking the ball off the court while trying to practice his ball juggling skills.

Golden State Warriors three-point king Steph Curry has been spotted repping a number of different football teams in England, notably visiting Tottenham and Liverpool during their encounter at Wembley, which was the temporary home of Steve Nash’s beloved. He received his very own Spurs shirt there with his name on the back as he was presented to the fans by club legend Ledley King, while he also was presented with a shirt before fans arrived by Liverpool right-back Trent Alexander-Arnold – who also presented Curry with one of his shirts to take home too.

While both Tottenham and Liverpool would want to claim him as a fan, Chelsea would too as Curry was invited to Stamford Bridge to meet their entire team before the game and also take a penalty kick at half-time in front of the crowd. However, he once referred to Chelsea fan favourite Eden Hazard as ‘ Dude from Chelsea’ when he tweeted his disgust after the Belgian infamously kicked a ball boy in retaliation to him wasting time. More recently, Curry has also been spotted with Neymar and Mbappe at PSG, so maybe he could be looking out for their results too now – who knows.

Are you serious. Dude from Chelsea's kicked the ball boy?!?

Back in 2017, Golden State Warriors big man Draymond Green met then Manchester United coach Jose Mourinho with midfielder Paul Pogba and then United striker Romelu Lukaku and traded shirts with them with the shirts posted on social media. Pogba is known to be friends with a few different NBA players, and Green is one of the players on that list and he was very chuffed to receive the red shirt.

However, just a few days later, Green traded shirts with then Barcelona forward Neymar, and just like his pictures with Mourinho, Pogba and Lukaku, he looked very happy as he gave the Brazilian a Golden State jersey. Now that the former Santos attacker has left Barcelona for PSG, could Green have followed the trend and his teammate Curry in repping the French giants? We haven’t seen anything yet but watch this space.

The LA Clippers big has also traded shirts with United’s Pogba, but his previous declaration as a Manchester City fan means we have classed him as one on this list – even if it may not still be true. The reason Ibaka followed City was to support his friend Yaya Toure who is a hero on the blue side of Manchester, but obviously since then the Ivorian midfielder has retired and the former Toronto Raptors, Orlando Magic and Oklahoma City Thunder star has sported the ‘Red Devils’ jersey.

Portland Trail Blazers’ 36-year-old forward Carmelo Anthony is 100% an Arsenal fan and there is no debate in that – he has already claimed it plenty of times before and it is well documented. He first admitted he was a ‘gooner’ back in 2015, meeting the squad which included Alexis Sanchez and Mesut Ozil at the time.

Since then, he has reiterated his love for Arsenal multiple times and in 2019 he released an episode of his YouTube show ‘Hoodie SZN’ which featured Arsenal defender Rob Holding, who was with the team in the USA because of the international friendly tournament called the International Champions Cup.

This one is the most random on the entire list, but at one point it was completely true! NBA Legend Dirk Nowitzki sported a Swansea City shirt on his social media while giving his support to the Welsh team who currently play in the second tier of English football. Unfortunately for Swansea fans, when the story of why the retired 14x All Star supported the Swans gets told, it becomes quite apparent that Nowitzki probably doesn’t support them anymore.

Great win and thanks for my sweet jersey! @SwansOfficial Nice goal @martinolsson3 pic.twitter.com/pDjqo3GcgX

The 7ft German is married to Jessica Olsson, sister to former Swansea full-back Martin Olsson who now plays at BK Hacken, while his twin brother Marcus plays for Helsingborgs IF. It is more likely that the Dallas Mavericks legend is a fan of one of the two Swedish clubs now than Swansea – but he is also an avid Arsenal fan, so he does still hold an interest in English football.