Great Britain captain Drew Sullivan says Newcastle player-coach Fab Flournoy is “like a brother to him”. 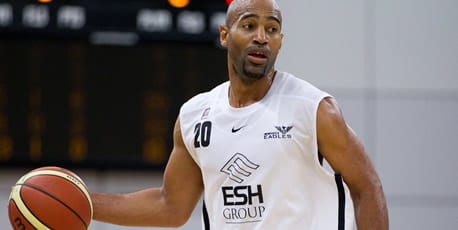 Great Britain captain Drew Sullivan says Newcastle player-coach Fab Flournoy is “like a brother to him”.

Sullivan, 31, played under and alongside Flournoy in his Newcastle days, and speaks of his admiration for the American, one of the longest servants in the BBL.

Writing on his new website, www.drewsullivan8.com, the current Leicester Riders player said: “My mother as well as myself have on many occasions referred to Fab as an older brother. The reason I believe it is very fitting is because of the friendship and respect that I share with Fab.

“I’m sure this will only add to the confusion on way I may not currently be wearing a Eagles Jersey.”

Sullivan first left the Eagles after helping them to a quadruple in 2005/06, but returned in both 2008 and 2010, before moving on to Mersey Tigers and Leicester Riders.

He added: “I remember when I came to Newcastle and started playing for the club the thing that stood out was one of the first conversations myself and some of the younger players at that time had with him.

“Fab said to us that he wanted the best for us as players and people and he was under any illusion that we’d all stay at the club and that suited him just fine. Because he felt that each of us had the ability to make a living out of this sport.

“That absolutely blow my mind and that day my respect for Fab started.”

Sullivan received a few hot receptions at the hands of Eagles fans as the Tigers went head-to-head with his former club last season.

He added: “The answer is unfortunately not nearly as sinister as many fans of the sport my like it to be. What Paul Blake, Fab and I all understand that basketball like any other sport has to make business senses first and form most.

“Unfortunately the fact that sports is a business like any other is lost on many fans. There are those that were/are upset with Newcastle for not signing me and there are those that feel the same towards myself for not resigning.

“Preceding the 2010/11 season an offer came from the Eagles but they did ask if I’d give them time as they wanted to build a guard orientated team, which is obviously there right. What sometimes gets lost in translation is that I as a player also have rights.

“At the top of those rights is to provide for my family so when the chance to have a guaranteed job (which wasn’t 100% at the Eagles) and make more money at another club came about I decided that was the best move for myself and for my family.”

You can read Drew’s blog on his website here.