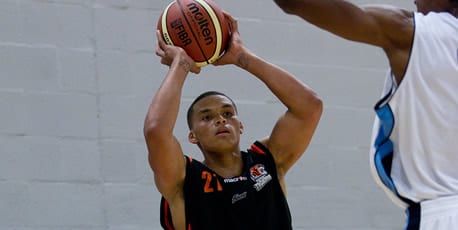 Inspired by local lads David Aliu and James Griffiths and the excellent Devan Bailey, the Tigers fought back from an 18 point deficit to earn overtime at 93-93, before edging past the Jets in the extra period to the delight of the home fans.

The reigning champions started with a flourish, and didn’t look like a team with just two wins this season, as they opened up a 14-2 lead within the opening three minutes.

But after seeing off that initial burst, the Jets slowly worked their way in to the game, with Bill Cole dominating in the paint, and by the end of the first quarter the visitors were within one at 25-24.

It was in the second quarter that the Jets stamped their authority on the game, consistently taking chances while their opponents got frustrated at their errors.

They kept control of the game and at one point led 90-72, and their fans confident of heading back to Cheshire with the championship points in the back.

But an inspired comeback from Tony Garbelotto’s men blew the game wide open. Twice in the last two minutes Aliu landed two crucial three-pointers to bring the home side within five points each time, and the Jets started to panic, as the Tigers’ enthusiastic defence earned its reward.

Bailey continued to march the Tigers around the court, but it was a big play by Griffiths in defence that gave the Tigers the free throws to tie the match.

It was tit for tat in overtime, and the Tigers hit the front for the first time when Griffiths landed a three-pointer.

Both sides tired, and struggled to land their baskets, but it was the home side that eventually prevailed to complete a stunning fightback and win 102-97.