It was the ultimate season for Newcastle Eagles as they picked up a clean sweep of trophies – we look back at their year with player-coach Fab Flournoy. 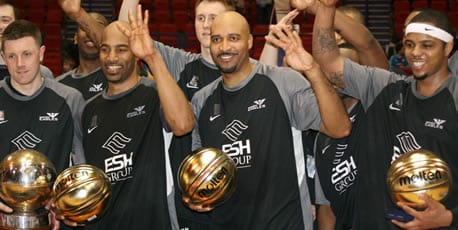 Fab Flournoy’s Eagles became the second team in BBL history to complete the sweep twice as a club since the Kingston Kings in the early years of the competition.

They last obtained the honour in the 2005/06 campaign which included most of the current squad members. Player-coach Flournoy, Darius Defoe, Charles Smith and Andrew Bridge were all a part of that successful roster.

Even though the Eagles were undoubtedly the dominant team this year, Flournoy said the sweep they have attained was not an easy task.

“We got challenged and tested a lot throughout this campaign and every single time, everyone pulled together and we answered every challenge that came up against us. We locked horns with every top team in the league and we had to go through every last one of them so we were in a position that was able to win all four trophies.”

After they won their last game against Leicester Riders in the Playoff Final, coming from behind early on to overcome their opponents by 71-62, Flournoy realised that this team was a special one.

“It was fantastic to win the last game on the last day of the season. It was a wonderful feeling. We sat back in the locker room, had some laughs and relished the moment to celebrate the accomplishments we have made as a club,” he said.

“Each team has something special about them. We had to play a certain way and make a lot of sacrifices.. This is why this team is special to me along with the input from all its volunteers and staff. They gave up so much of their time to allow us to have what we needed before each and every basketball game.”

At the start of the season, Newcastle accelerated to the top of the league winning 14 out of their first 16 games that ended in a closely contested loss to Worcester Wolves. The Eagles got off on the right foot and the key to this was the experience and cohesion they had as a team along with the fresh addition of Andy Thomson.

“We just hit the ground running. We had Thomson who just fit right into the fold. When we signed  Thomson, I knew we were on to something special because Andy has played like he has been with us for three or four years,” Flournoy said

“The thing we had was continuity. Other teams were still in the process of learning their systems and style of play whereas we were already established. We had four players out of our starting five who had done it already so when we had a good first 16 games, teams were still trying to gel and come together and figuring out what they were going to do.”

“The more players I have that understand the system I run, the more easier it is to be effective on court. So it is great when I have players like Defoe and Smith in particular who have been with me for a long time.”

Midway through the season, the Eagles used a tournament in Holland as good preparation for their BBL Cup Final against Plymouth. After a high scoring affair, Newcastle claimed the first piece of silverware in a 115-94 victory.

Flournoy said: “In the Cup final, I didn’t think Plymouth were aware of how we were playing. We had just got back from a tournament in Holland. We were playing everyday. We were in rhythm, we were in form and that was probably the best part of our season because we knew what we had to do in particular for this final. Charles Smith was playing unbelievable  at that time so we just caught them totally by surprise.”

A few months later, the pair met again in the BBL Trophy Final over two legs. Despite trailing by a 10 point deficit after the first leg, Newcastle prevailed on their home court with a 96-80 success over the Raiders. Flournoy paid tribute to Plymouth:

“They were a little more prepared for us this time because we had league games in between. From that point, it became a game of chess. They countered how we played and then we countered their game and style of play. We then reacted to this and adjusted to their style.”

“I think towards the end of the season they were one win away from being a very successful team,” he said.

The Eagles experienced a dip in form but battled their way to the league Championship and through to the showpiece playoff final. Flournoy gave credit to Cheshire Jets who rattled his team in the semi finals.

“They had to fight from 9th spot to finish in the 6th spot. Cheshire deserve credit towards their players, coaching staff and the whole organisation because they could have easily given up but they didn’t they kept going. It just shows how good that team was,” he said.

In the Final, Leicester Riders capitalized on the mistakes the Eagles made to take an early lead but the Eagles came from behind to grasp the ultimate prize.

Flournoy said: “The final for us was a case of just getting through it because we took a lot of lumps to get into the final. When we went up against Leicester we knew what we had to do because we had done it before.”

“We kept battling and before you know it we won. It was just such an amazing feeling that I can’t describe. After we won, we paused for a second and we were like did we really just do this? We done it we accomplished everything we set out to do.”

Despite overcoming all challenges this season, Flournoy says the standard of the competition this season has been very tough.

“There were teams in the league who at one point in time could have claimed any piece of silverware. It did not matter whether we were the  dominant club. You can’t take this away from us, people can say whatever they like but we were the best team that came out to play and we will be remembered.”