After losing two games in succession, Matt Schneck has spoken of Cheshire Jet’s desire to recapture the form that saw them secure three victories on the spin in February. 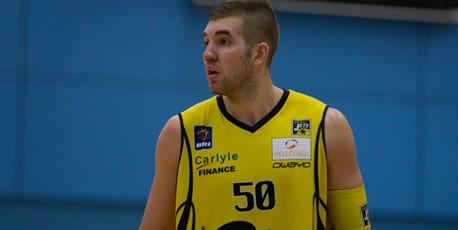 After losing two games in succession, Matt Schneck has spoken of Cheshire Jets’ desire to recapture the form that saw them secure three victories on the spin in February.

Wins over the Mersey Tigers, MK Lions and Glasgow Rocks had spirits in the camp extremely high last month, but there was a reality check to come with defeats to the Newcastle Eagles and most recently Worcester Wolves, the top two in the British Basketball League.

Speaking exclusively to bblfans.com about this fascinating spell, Schneck said: “The three game win streak before these past two weekends really had our confidence at a high. We were firing on all cylinders and people were beginning to get on a roll and play as a team unit.”

“But we’ve faced teams at the top of the table these past two weekends. I think if you look at our game against Worcester, we played three very good quarters and then in the fourth we made the same mistakes that we have been making leading up to this point in the season.”

“We just need to continue to expand, take some of the good and keep doing those things.”

As for how he and his team approach playing the top teams – such as Wolves and Newcastle – Schneck said that Cheshire are always targeting victory.

“Obviously we want to win every game. At this point our magic number is four or five wins to try and get in the play-offs, but every game we are playing to win.”

“We’ve had some tough breaks this season, but it doesn’t make us a bad side and we feel we can be competitive against anybody.”

The aim now of course is to replicate the form that saw Cheshire secure three wins last month and Schneck is aware that the performances in this spell should be the basis for the team’s success.

He continued: “For us, it depends on how well we are shooting the ball and how well we are playing defensively. Some games this season we have made individual mistakes, but during those three wins we played with great maturity.”

“In that sense I think we used our strengths to our advantage and played together as a team. Confidence was high during that period and hopefully we can get that back.”

Next up for Cheshire – who currently sit 9th in the BBL – is a home clash with the Plymouth Raiders, the current occupants of 4th position. Schneck is aware that this is another tough challenge, but is convinced his team can make home advantage count.

“It’s been another good week of practice. Plymouth is a good match-up for us. They are very athletic and long which has caused us trouble in the past.”

“If we come out on our home court and try to establish ourselves we’ll be fine. We just have to assert ourselves a little bit. We need to focus more on ourselves than who we are playing.”

Sunday’s fixture with Plymouth is the start of a crucial spell for Cheshire too, with Schneck saying: “We have about a four or five game stretch coming up in about two weeks. This is really going to be the telling factor for us.”

“We play Sheffield, Guildford and MK as well as Leicester. We want to steal a few wins and try and get 6th, 7th or 8th.”

Do you think The Jets can make the play-offs? What are your predictions for this weekend’s home game with Plymouth? Let us know your thoughts!

Leicester’s chance to heat up title race
Glavan: Eagles are the very best