Rugby stars give basketball a go 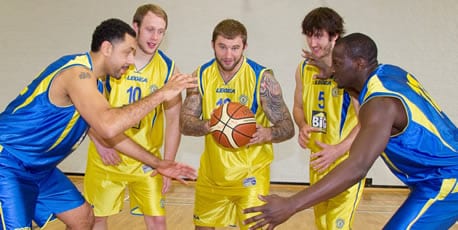 Karl Fitzpatrick, Wolves’ player welfare manager, said: “We are really looking forward to taking on the Wolves basketball team, but more importantly we are wanting to raise awareness of After Adoption. There will be a chance to meet some of the first team players as well as checking out their basketball skills. This should be a great afternoon in aid of a fantastic cause.”

Delme achieved his dream to become a basketball player and had a career lasting over 20 years, first in Manchester, then the US and as a professional across Europe. He was also part of the England team that claimed the bronze medal at the 2006 Commonwealth Games.

Currently working with After Adoption as a Community Fundraiser, Delme said: “As an adopted adult myself, I understand the complex issues involved in adoption so wanted to work with After Adoption to promote the wonderful work they do and services they offer. My adoption was a transracial adoption and my adoptive parents provided me with a fantastic support network that helped me achieve my ambition of becoming a basketball player.

“I’m really looking forward to the game – it will be a lot of fun playing alongside the rugby players for two wonderful causes in a unique game, raising money for After Adoption and the Warrington Wolves Foundation Basketball Club.”

The Wolves Charitable Foundation works within the local community of Warrington and through the umbrella of sport works in four key areas: health, education, young people and social welfare.

One of the UK’s leading adoption charities, After Adoption, works to find loving homes for children in care, helps birth relatives deal with loss, supports those searching for a relative, works with adoptive families, and provides counselling and information to all those affected by adoption.

Lynn Charlton, Chief Executive of After Adoption, said: “This promises to be a great event for the entire family. The funds raised will be used to support our work with adopted children and families and tickets are available to anybody who would like to attend the game and make a difference to people’s lives.”

With a dedicated family finding service, Families that Last, After Adoption has extensive experience of finding permanent carers for children who cannot stay with their birth parents, and providing the lifelong support to make these placements work.

If you are interested in attending the charity basketball game click here or contact Warrington Wolves Foundation Office. Tickets are £10 for adults, £5 for children and family tickets are also available for £20 (2 adults and 2 children).

Would one-game weekends improve the BBL?
Coach Elderkin looks for the positives