We caught up with Leicester Riders big guy Brett Royster after his teams last game before Christmas at the John Sandford Sports Centre, to ask how he is settling into the life in UK and the game in BBL. 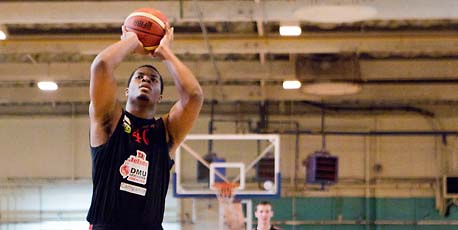 We caught up with Leicester Riders big guy Brett Royster after his teams last game before Christmas at the John Sandford Sports Centre, to ask how he is settling into the life in UK and the game in BBL. The 6’8″ forward played his last four seasons in the NCAA 1 with Florida Atlantic University, before choosing to come over the BBL for his first pro-season. How has the change gone from NCAA to BBL?

‘I am settling to life here Leicester and BBL really well, I love playing with this group of guys over here, the city of Leicester has been great so far and I am enjoying my time here.’

Many coaches and players say that it is the big players, who play hard under the basket, that usually find it most difficult to adjust to the way the game is called in the BBL and Royster agrees with this.

‘It has taken me a while, in some of the early games I got easily into foul trouble. I feel like as the season has progressed I have been getting more used to the way the game is played here and how the ref are calling the game’

Stats are also backing what he is saying, in the first nine games of the season Royster was averaging over 3 personal fouls per game, in the last two he has only had one in each. His highest points were also scored in the last game against Durham, where he netted 13 points, to cap an solid over-all performance (13p/7rb/3assist).

Royster and Riders had a bad weekend the other week, with two defeats in a three days, Royster feels that even if the losses did hurt the team it also helped the grow and learn from them.

‘It was tough, we’ve been doing pretty well as a team through the early season, so to lose twice in a row was tough. But we had a good week at practise last week and bounced back with a home win against Durham.’

Riders are now out of the two Cup competitions, and now turn their attention to winning in the Championship – Royster knows that the season is long and takes a game by game approach the following four months of BBL action.

‘Our goal is to go into every game looking to win it. I am not quite sure what the system here in the BBL is in regards to the Trophy/Championship – but out aim is to go as far as we can at the end of the season and hopefully be able to lift a trophy at the end of it.’

Last few weeks have had Riders playing twice a week, so how does he plan to use the eighteen day break in action.

‘I will go back home, see my friends and family and hang out with them – really looking forward to doing that.’

But ever the professional he is quick to turn his attention back to the action after the break.

‘I do really look forward coming back here to Leicester, and continue what we’ve started here with the Riders.’

There has already been praise for the Riders big guy from fellow players and coaches – and after seemingly shaking off the small injury issues he was carrying in the last weeks, Royster will be a player to watch during the second half of the season.