Glasgow Rocks moved up to second in the BBL Championship table with a 82-64 victory over the lacklustre Sheffield Sharks in Glasgow. 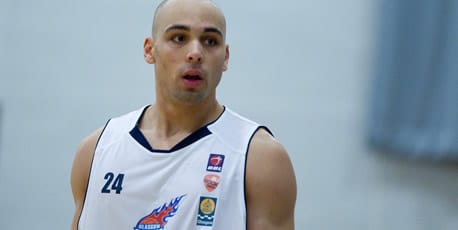 Glasgow Rocks moved up to second in the BBL Championship table with a 82-64 victory over the lacklustre Sheffield Sharks in Glasgow.

In truth, the scoreline flattered the home team and the Sharks always looked capable of getting themselves back on top in this one up until the final minutes, but their inability to finish at the rim and poor long range shooting cost them dearly.

A fairly even first quarter saw the Rocks eek out a 19-18 lead, despite an injury to starting centre DeAundre Cranston in the first five minutes to go along with one to starting point guard EJ Harrison, who didn’t feature in this game.

The loss of Cranston gave the visitors a considerable size advantage inside, which they looked to exploit through the second quarter by pounding the ball down low with limited success due to poor finishing and costly turnovers. The Rocks had a size advantage of their own in the front court, and used Danny Huffor and Mychal Green to repeatedly shoot over the much smaller Jimmy Langhurst and draw out an eleven point lead, which the Sharks pegged back to nine before the break.

The third quarter saw the Sharks start brighter, but some energetic defence and momentum halting shots from the Rocks allowed them to get back on top with an 8-0 run that stretched the lead to seventeen, before an 11-0 Sharks run was arrested by a clutch three from Sterling Davis. A pair of Olu Babalola free throws gave the Rocks a 60-53 lead going into the final period, but you sensed it just wasn’t going to go the Sharks way when Mike Tuck missed a wide-open layup in the dying seconds of the period.

Again in the fourth quarter some clutch shots from the Rocks – most notably a three from Martins Malnieks – just as the Sharks were gaining some traction was crucial, but the balance appeared to tip in the Sharks’ favour when the third Rocks first-team player left the game when Gareth Murray fouled out with just under five minutes to play.

When the Rocks’ lead was cut to just eleven with a Nate Reinking floater it really felt like the Sharks could sense blood, but some awful close-range finishing by Babalola and Justin Dobbins, some poor turnovers and a great individual effort by Mychal Green allowed the Rocks to pull even further ahead, at which point the result was a formality finishing 82-64.

Mychal Green led all scorers with twenty-three points, but it was the action-packed energetic display of Danny Huffor (18points / 7 rebounds / 5 steals) at both ends of the court that drew the most plaudits from the home crowd.