The injury plagued Glasgow Rocks came from a thirteen point deficit to snatch a dramatic win against MK Lions. 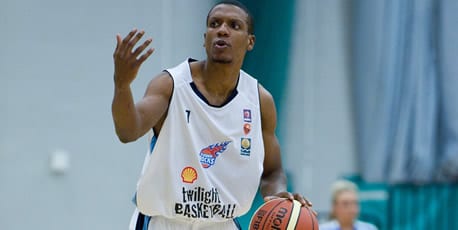 The injury plagued Glasgow Rocks came from a thirteen point deficit to snatch a dramatic win against MK Lions.

Already without star point-guard EJ Harrison, the Rocks were dealt a further blow when an Achilles injury to player/coach Sterling Davis ruled him out of this game.

The Lions started the game brighter, with Nuno Pedroso knocking down three threes without missing as the Lions raced into an 11-6 lead. The Lions increased their advantage at 18-11 before the Rocks pulled their way back into it late in the period, with the first quarter finishing 25-24 in favour of the Lions.

The second quarter was a fairly evenly matched affair, despite Rocks star guard Mychal Green sitting out much of the period due to picking up his third foul early on. Young guard Johnny Bunyan stepped up admirably for Green, chipping in with six points as the Rocks edged the quarter by three and went in at half time up 41-39.

The Lions came back strong in the third, tearing off on an 11-0 run that put them up 55-45. The Rocks pulled the deficit back to three, before another Lions run extended their lead to thirteen early in the 4th.

Eight straight points by Mychal Green pulled the Rocks back within five with just over seven minutes to play, a lead that the Lions held until just two minutes to remaining. With Demarius Bolds fouling out mid-way through the period the Lions were there for the taking, and two poor turnovers from the Lions and clutch baskets from Green and Huffor saw the Rocks edge in front with 44 seconds to play, before Green extended the lead from the line with 29 seconds left. The Lions missed both chances to reduce the deficit before the game finished 95-92 in favour of the Rocks, who move up to second in the BBL Championship with their victory.