Rocks back in action against Jets

Glasgow Rocks return to BBL Championship action after a week off when they host Cheshire Jets at Kelvin Hall on Sunday. 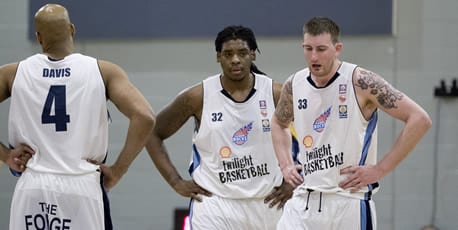 Glasgow Rocks return to BBL Championship action after a week off when they host Cheshire Jets at Kelvin Hall on Sunday.

Rocks’ player-coach Sterling Davis was pleased to have the break, but is looking forward to getting back into action against the Jets: “Once again it is needed with our group to continue our ever- present healing process. We are starting to get back to early days with injuries so this is definitely on time for us.

“Cheshire are looking like they are starting to come back in to form unfortunately for us. They went through a tough patch just as we have so it will be interesting. Matt Schneck is a proven work-horse game after game and also Adam Brown at the point guard spot gives them a very solid leader with the ball. ”

Jets won 85-78 when the sides met at Northgate Arena in November, and Davis is hoping that his fifth placed side will produce a better performance on Sunday: “We have only seen them once this season at their place and they just flat out out-played us. They shot the ball exceptionally so we have to do a better job of guarding their shooters.”

Jets’ coach Paul Smith rates the Rocks highly: “They are a well run team, they’ve been playing well in recent weeks. Plus they have the added bonus of EJ Harrison coming back to fitness.

“Danny Huffor has really stepped up in the absence of EJ Harrison, while Mychal Green and Gareth Murray have both put up consistent numbers this year.

“We probably had one of our best performances last time we played them at the Northgate. And having come off two wins in a row we just need to maintain our focus and put in a good performance.”