Rocks and Eagles meet once again

Old rivals Glasgow Rocks and Newcastle Eagles meet for the fourth time this season on Sunday evening, with BBL Championship points at stake at Kelvin Hall. 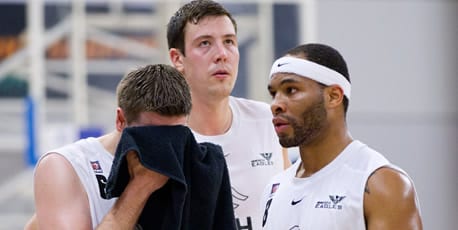 Old rivals Glasgow Rocks and Newcastle Eagles meet for the fourth time this season on Sunday evening, with BBL Championship points at stake at Kelvin Hall.

The teams met twice in the BBL Trophy at the start of the campaign, and Eagles’ 85-63 home win proved key as the 76-70 Rocks’ win in the return wasn’t enough to take them through to the semi-final. That is Eagles’ only loss to date this season, and they gained revenge in the BBL Cup quarter-final with a thrilling 78-75 home victory to reach their second semi-final of the season.

While Eagles have made a franchise-record six game winning start to the season, Rocks have also started the BBL Championship season brightly, and go into the weekend in second place with five wins from seven games.

Rocks’ player-coach Sterling Davis expects a tough game against the Eagles: “They are off to a great start in the season. They have consistently finished games in finding ways to win.

“I think having Paul Gause [pictured] back will really give them that balance at the lead position and really get the ball to where their threats like it. In our last encounter we just did not make the plays necessary at the end on both sides to pull it out. You have to finish games on a high level to win games of this calibre.”

He said: “I think we know everything about each other. We seem to play them every other week, and we’ve met loads of times in the Cup and Trophy over the last few years. Fab and Sterling have identified how they want to play, and we know what to expect.