Leicester Riders continued their quest for the BBL Championship crown with a dominant display over the Durham Wildcats in a 97-69 comprehensive victory. 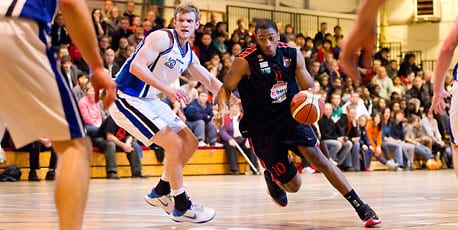 Leicester Riders continued their quest for the BBL Championship crown with a dominant display over the Durham Wildcats in a 97-69 comprehensive victory.

After an even first ten minutes, the Riders exploded into the second quarter. Sharp shooter Bradd Wierzbicki collected nine points in an 18-5 surge that put Rob Paternostro’s side 41-26 in front. Durham managed to spark enough energy to start a 7-0 run that trimmed the deficit at 49-37 heading into the break.

Inensive defensive pressure from the Riders restricted their opponents to just a single score putting the tie way out of reach in the opening seven minutes of the 3rd quarter. As a team, Leicester nailed 16 points to all but seal the vital two Championship points with the score standing at 65-39.

GB captain Drew Sullivan led his side with 18 points for the Riders, but it was Wildcats Mario Flaherty who led all scorers with 22 personal. he also added 14 rebounds to post  a brilliant double double performance.

Leicester sit third in the table after this result, trailing league leaders Newcastle Eagles by six points with three games in hand. However,  the Plymouth Raiders are breathing down their necks with a game in hand of their own.

Jets back to winning ways
Competition: Guess Who #1