The Leicester Riders remained undefeated in the BBL Championship with a close 99-94 over the Sheffield Sharks at the EIS on Friday night. 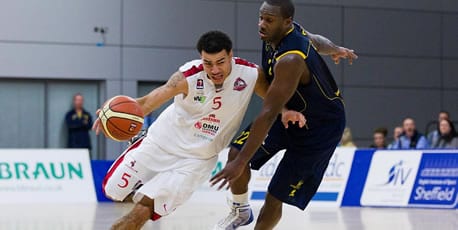 The Leicester Riders remained undefeated in the BBL Championship with a close 99-94 over the Sheffield Sharks at the EIS on Friday night.

Cameron Rundles was the high point man once again for the Riders as he collected 25 points. Rundles effectively won the game for his team as he scored five points in a 7-2 Riders run to successfully seal victory.

There were also impressive contributions from Drew Sullivan who bagged 21 and Brad Wierzbicki who finished with 23 points. But the performance of the night goes to Justin Dobbins who battled effortlessly to keep his team in the game. He finished with top scoring honours of 34 points with a healthy five assists.

Dobbins made a great start for Sheffield scoring the first two baskets to spark a 6-2 run, but great shooting from Sullivan and Rundles pulled the Riders within two at 10-8. The two sides battled basket for basket until a dominant Dobbins tied the game at 22-22. The Riders edged ahead with a Wierzbicki three for a slender lead of 25-24 going into the second period.

The teams kept fighting for the lead in the second quarter but it was the Riders who grabbed the lead going into the break. Wierzbicki had the hot hand from 3-point range hitting 4 of 5 attempts from the arc. He hit another to tie the game at 49 and then Sullivan posted a score to give his team the slight advantage at halftime.

Nate Reinking turned the tables early in the second half, nailing a triple to give the Sharks a 60-59 lead. The Riders began to slip behind but a late burst saw them regain advantage on a 6-0 streak to take the lead at 76-74 heading into the final stanza.

Rob Paternostro’s side proved they were contenders this season in the last minute, battling back to regain the lead and holding their nerve to claim victory.