The rejuvenated Glasgow Rocks are looking in good shape for the second half of the season after weathering their injury storm. 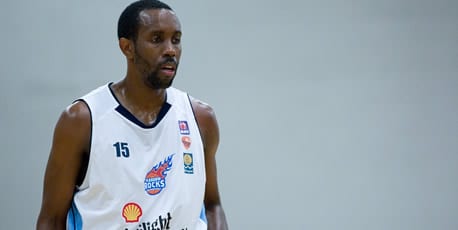 The rejuvenated Glasgow Rocks are looking in good shape for the second half of the season after welcoming back BBL veteran point-guard EJ Harrison from injury last week.

Former NCAA Champion Harrison has been sidelined since early November after severely spraining his ankle, and Rocks player/coach Sterling Davis is delighted to have him back. “It’s really crucial [having EJ back], just to get that extra little experience in the front court and also for rotation purposes too,” said Davis.

Although clearly not back to full fitness yet EJ has made valuable on court contributions since his return, averaging just over 10 points and 3 assists in just over 27 minutes of action in a stretch where the Rocks have gone 2-1, their only loss coming courtesy of a 4th quarter melt-down against title contending Plymouth Raiders.

“I’m not making any excuses. I’m still not where I want to be, but I think I can help the team regardless or what percentage I’m at,” said EJ, with Davis adding, “He’s not 100% still, but he’s effective in what he’s doing right now, so we just have to take it as we can with him.”

Although EJ’s return has given the Rocks a much-needed boost, both Harrison and Davis were quick to praise the bench players who’ve stepped up in his absence.

“[The guys stepped up] great,” said EJ. “Guys that I didn’t trust back in September I fully trust now – Jonny Bunyan, Danny (Huffor), Martin (Malnieks). It’s just good for us going down the road.”

A week off will let Harrison get some more recovery time and should help cure a few other niggles within the team as we approach the business end of the season, giving Sterling Davis a welcome headache. “Now it’s almost like you have too many guys to try and fit them in,” said Davis with a smile.