Guildford Heat kept their postseason aspirations alive thanks to a comfortable 83-66 victory over the Prestige Homes MK Lions at Surrey Sports Park on Sunday afternoon. 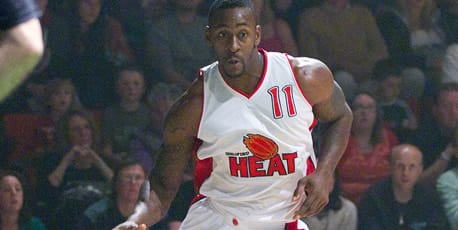 Guildford Heat kept their postseason aspirations alive thanks to a comfortable 83-66 victory over the Prestige Homes MK Lions at Surrey Sports Park on Sunday afternoon.

The Lions exploded out of the blocks as they opened up an early 6-15 advantage midway through the opening quarter, but the Heat responded immediately as they got themselves back into the game as a Mike Martin basket sparked the Heat into life with a 13-2 tear to take the lead at 19-17.  Both sides traded baskets for the remainder of the period but it was the Lions who ended the quarter on top leading 21-23.

In the second quarter however it was the Heat who broke the game open as a Shaun Durant basket sparked an impressive 14-2 burst to turn the game on its head and give the home side the lead at 39-29 with three minutes remaining in the half.  The Lions tried desperately to close the deficit before the half and a Stefan Gill three-pointer to end the second quarter saw the Lions trailing by nine points at 43-34 heading into the locker rooms at the half.

In the second half a big three-pointer from Carl Josey sparked the Lions into life as they slowly clawed their way back into the contest and trimmed the deficit to just two points at 51-49 with four minutes left in the third quarter but this only served to kick the Heat into action as they stepped up their intensity at both ends of the floor as they rattled off a 15-2 burst to end the quarter well on top leading 66-51 heading into the final stanza.

In the final period the Lions started the quarter with a 9-2 run to get to within eight points at 68-60 but that was as close as the visitors would get as the home side sealed the victory with a 7-0 burst to take the score out to 79-64 and they held on for the comfortable victory.

Martin led the scoring for the Heat with 16 points, but it was Demarius Bolds who led all scorers in the contest with 24 points for the Lions.

At the end of the game, Heat Head Coach Creon Raftopoulos was happy to come away with the victory.  “I’m very pleased with the win.  It was a good defensive performance and after a slow start, we got into the game and played well.”