Raiders through to Cup Final

The Plymouth Raiders shaved off a six point deficit with just 49 seconds left against the MK Lions to beat them 107-99 in overtime which, earned them a place in the BBL Trophy Final. 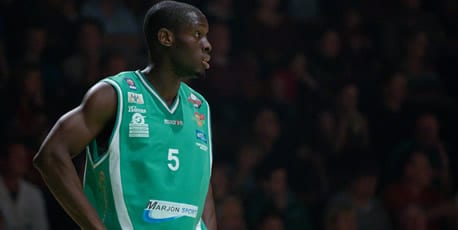 The Plymouth Raiders shaved off a six point deficit with just 49 seconds left against the MK Lions to beat them 107-99 in overtime which, earned them a place in the BBL Trophy Final.

Last season’s MVP Jeremy Bell was the hero for his team as he netted a game high 32 points in Devonshire including the vital six points which effectively won the game. The hosts found themselves down by a double digits in the early exchanges with Lions leading scorer Demarius Bolds helping MK gain an 8-3 advantage. Mike New’s side then built on their advantage to keep in front at 23-18 by the end of the first period.

Michael Ojo sparked a comeback to bring the home side back into contention with an 8-2 burst early in the second. Ojo scored again to bring Plymouth five points in front on the aggregate scoreboard having been behind 87-81 48 hours earlier in the previous contest of this two-legged semi final. However, the Lions finished the half the better team with an 11-4 run to re gain the lead at 43-41 heading into the lockers.

Trailing by six points at the start of the final quarter, the Raiders came storming back. They put themselves ahead at 64-62 but the Lions came roaring back as  Nuno Pedroso nailed a three to pull the score in their favour at 79-75.

The Raiders looked like they were going out down by six with a minute remaining but not as long as Bell was on the floor. He sunk two three pointers in succession to bring the scores level.

With the scores tied, the game went into overtime and the Raiders stepped up their game to take the lead 95-89. They never looked back from there as they held on in a nervy final minute to book their ticket for their second domestic final this year.