Prezzie-Blue and Bell to go head-to-head

It will be a battle of the point guards this weekend as Sherrad Prezzie-Blue and Jeremy Bell look to lead their respective teams to victory in the Worcester-Plymouth BBL Cup semi-final. 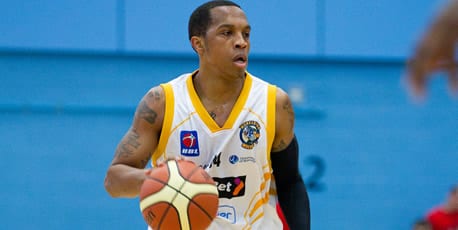 After this weekend’s victories against Mersey Tigers and Guildford Heat, the Worcester Wolves occupy clear second place in the BBL Championship. However all attention will now switch to the BBL Cup, as Paul James’ men prepare for their two-legged semi-final against Plymouth Raiders.

One of the major talking points of Wolves 77-76 triumph a few weeks ago against the Raiders was the ‘anything you can do, I can do better’ battle between Wolves point guard Sherrad Prezzie Blue and Plymouth’s playmaker Jeremy Bell.

Last year Bell plied his trade at the Chester Jets, averaging 23 points and 4 assists a game, and achieved the considerable honour of being awarded the BBL Player of the Year. However, despite this individual accolade, he was unable to lead his team to any trophies. This season he has signed for a club hungry for silverware.

Talking about his move to the Raiders, Bell remarked: “I’m settling in well at Plymouth. Off the court it was an easy adjustment for me, but on the court I’m still not totally satisfied. We’re still figuring out our identity and getting used to playing together, but each week we work harder in practice so we can compete at our full potential come game time.”

The first chance for Bell to grab team success in the British game will be in the BBL Cup, and he is in a good mood about this weekend: “The best team will win. I am confident, and I like our chances.”

When asked for his thoughts about his side’s last encounter with the Wolves where they lost in such agonising fashion Bell, though disappointed, gave credit to his opponents: “I was upset with the loss, we didn’t play the full 40 minutes of the game like we are capable. I thought we played catch up from behind, and we came up short in the end, although I give Worcester credit because they played well the entire game.”

Sherrad Prezzie-Blue’s last second basket was the difference between the two teams last time they met, but Bell is quick to take the focus away from any talk of a duel between the two American guards: “I don’t care about the battle of the point guards, he is a good player, but basketball is a team game so the battle will be Wolves versus Raiders, us against them, and I want to win that battle instead.”

Both organisations are expecting bumper crowds. The first leg of the tie will be at the University of Worcester this Saturday (tip off 7pm). The return will take place the next day in Plymouth.