Plymouth Raiders moved themselves up into fifth position in the BBL Championship table thanks to an impressive 101-84 victory over the Mersey Tigers at the Plymouth Pavilions on Sunday afternoon. 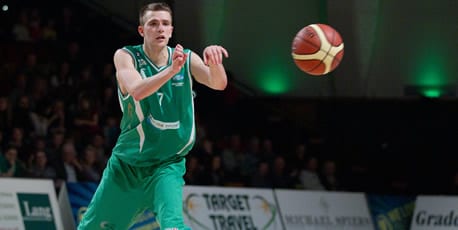 Plymouth Raiders moved themselves up into fifth position in the BBL Championship table thanks to an impressive 101-84 victory over the Mersey Tigers at the Plymouth Pavilions on Sunday afternoon.

A 12-2 start to the game, including five points from James Jones, saw the home side stamp their authority on the contest, but the Tigers came out of an early timeout with an 11-0 burst of their own to take the lead at 12-13 midway through the opening period. The remainder of the quarter saw both sides trading baskets but it was the visitors who held on to a slender four point advantage at 21-25 at the end of the first quarter.

The Raiders started the second quarter in exactly the same way thanks to a 9-0 run to retake the lead at 30-25. The Raiders continued to keep their noses in front for the remainder of the half as they steadily extended their advantage to lead by 13 points at 50-37 heading into the locker rooms at the half.

In the second half the home side continued to extend their lead throughout the third period as they steadily moved themselves out to a 17 point lead at 77-60 heading into the final stanza.

In the final quarter the Raiders extended their lead out to the biggest lead of the game at 89-66 off the back of an 8-0 tear midway through the period and despite the best efforts of the Tigers to trim the deficit, they could only get to within 11 points at 95-84 with a minute remaining but the Raiders held on for the all-important victory.

Lehmon Colbert (pictured) led all scorers in the contest with 21 points for the Raiders, while David Aliu picked up a team-high 17 points for the Tigers.

Win number 11 for Newcastle
Lyons: Langhurst ‘Should Be Back Tuesday’