Plymouth Raiders forward Lehmon Colbert is expecting a tough game when his side meet One Health Sharks Sheffield in BBL Championship action on Sunday. 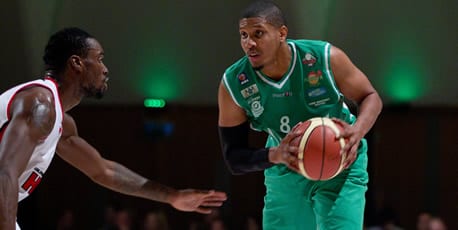 Plymouth Raiders forward Lehmon Colbert is expecting a tough game when his side meet One Health Sharks Sheffield in BBL Championship action on Sunday.

Sharks head into the game with only one win in their last five games, and have dropped to joint sixth in the table, but Colbert won’t be taking them lightly.

He said: “Sheffield are a high-scoring side, but Nate Reinking’s missing and they’re running a little short-handed on players. However, they have guys who can get it get it done, so we won’t be underestimating them.”

Raiders have played the least number of games in the BBL, heading into the weekend in fourth place with a 9-2 record, but coach Gavin Love knows his side faces a tough game on Sunday.

He added: “Sheffield are always tough and have a great line-up, their entire roster can hurt you in any game so you have be aware of any players impacting the game.

“After we’ve played at Worcester the night before I know this will be another close game and another tough weekend. We must continue to be strong mentally to get wins this weekend.”