Plymouth Raiders have been fined by the BBL for an incident involving their mascot “Foxy” in the recent game against Guildford. 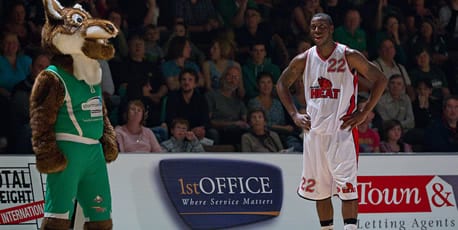 Plymouth Raiders have been fined by the BBL for an incident involving their mascot “Foxy” in the recent game against Guildford.

Video footage showed that the popular mascot, who regularly features at BBL finals days, entered the court and pulled down the shorts of Heat player Martelle McLemore, after a previous altercation between the pair.

A statement on the official BBL website read: “The BBL Disciplinary Panel have concluded their investigation in relation to an incident at the above game.

“The Panel has determined:

“1. That the Plymouth Raiders club be fined for their failure to control their Match Night Presentation

Plymouth won the game 87-83 and have since won two games in the BBL Cup to put them through to the semi-finals.

Raiders chief executive Dave Briggs issued this response: “The club has received a small fine from the BBL for not controlling Foxy and allowing him to enter the playing court. We as a club accept our share of responsibility for the issue occurring. From our point of view, the incident was exacerbated by the Guildford player Martelle McLemore pushing Foxy with a fully extended arm and we note that as a consequence the player has also received penalty points which will stay with him for the remainder of the season.

“We have drawn up a code of conduct for Foxy, and this will govern what he is and isn’t permitted to do in future games. As far as the Raiders are concerned, this matter has now been concluded and we are keen to get the BBL Championship season underway next Wednesday at home to the Milton Keynes Lions (Plymouth Pavilions, 7.15pm)”

Lamble – We are contenders
Heat stars join the X Factor