Plymouth Raiders coach Gavin Love has called on his team to respond to their successive defeats in the BBL by turning on the style against the Worcester Wolves this weekend. 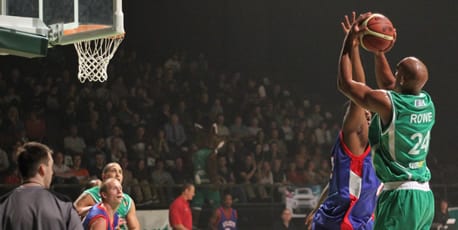 Plymouth Raiders coach Gavin Love has called on his team to respond to their successive defeats in the BBL by turning on the style against the Worcester Wolves this weekend.

Following a four game winning streak, the Raiders lost to Guildford Heat last Sunday and this was followed by another reverse at Leicester on Wednesday.

They have already qualified for the play-offs of course, but these two defeats have seen them drop to 4th in the BBL table and Love wants a positive display this weekend to get his team up and running again.

Speaking to bblfans.com about the final three games of the regular season, he said: “We’ve got three more games, two on the road and it’s going to be tough for us towards the end of the season.”

“We want to make sure we win at least two out of three. We want to finish strong going into the play-offs.  I’m sure we can put together some big performances.”

Referring specifically to this weekend’s clash with Worcester – the final home game of the regular BBL season – Love said that the Plymouth fans deserve a strong performance from his team.

He continued: “The fans have been fantastic all year. It looks like it’s going to be another sell out [against Worcester] and they will hope for a good show at the weekend. I’m sure they’ll get one too.”

Love then admitted that his team ‘didn’t really get going’ in the 96-72 defeat to Leicester on Wednesday. Perhaps he would like to see a return to the form of March, when Plymouth won all but nine of their matches.

This run saw Love named as the BBL coach of the month, recognition that he describes as ‘nice’ as it is a sign that the team are doing OK.

“It just means the team has performed well in the league. It’s always nice to get accolades but it’s the team who have done the good job.”

“We’ve had two defeats in the last week which is not great and we have to get back and perform for the rest of this month.”

Plymouth host Worcester from 3.45pm on Sunday, before the final two games of the regular BBL season sees them travel to Milton Keynes and Sheffield.