MK Lions skipper: We still have everything to play for

Ahead of the tough BBL trip to face Newcastle Eagles on Friday, MK Lions Captain Stefan Gill has called on his team to forget about the past and focus on finish the season strongly. 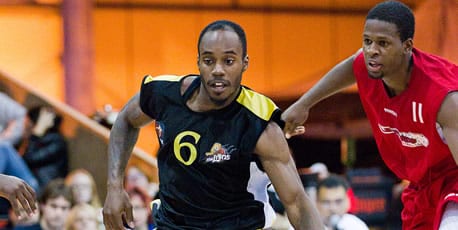 Ahead of the tough BBL trip to face Newcastle Eagles on Friday, MK Lions Captain Stefan Gill has called on his team to forget about the past and focus on finishing the season strongly.

As things stand in the BBL table, the Lions are 8th, level on points with the Mersey Tigers, meaning that a place in the play-offs is in their sights with six games remaining.

Victory at league leaders Newcastle on Friday evening would of course assist their bid and Gill is hopeful that his team can be competitive against a team that won the BBL Trophy at the weekend.

Speaking to bblfans.com, Gill said: “They could be emotionally exhausted. We are not really focusing on the opposition though. We are just focusing on our own problems.”

“Usually against other teams we play better and raise our game. However, we are not worried about the opposition or who is playing against us on the other side of the court. It is just a case of getting us to work together as a team.”

Gill then spoke about how it has been an ‘up and down season’ for the Lions, but that there is still a huge amount for them to play for between now and the final game of the campaign.

He continued: “We are disappointed with how it has gone, but we are not trying to dwell on anything. We still have everything to play for.

“The BBL Championship is a major trophy and we still have that to play for. It’s been an up and down season, but it’s been a great test.”

Gill believes there are plenty of positives to take from the season too, referring to the fact that players are maturing and that the season could still end with great success.

“We are working together and everybody is still here. Everyone is still friends and if nothing else, this has made us stronger as individuals. There are six games left, that’s all that matters.”

“We have to focus on short-term goals now. We are not worried by what has happened in the past. We just need to focus on every game as it comes.”

With this in mind, Gill will be focusing on the trip to the Newcastle Eagles on Friday evening. This one gets underway at 7.30pm.