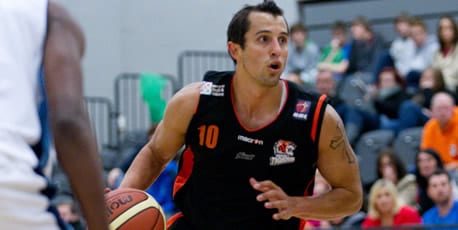 Sam Cricelli spoilt the party with a brilliant offensive display shooting at 75 percent in a double double performance of 18 points and 16 rebounds. Matthew Otten also collected 18 points and Myles Hesson claimed top scoring honours for the night with 24.

The hosts came from behind and completed the turnaround in the final quarter with excellent offensive execution.

The Champions couldn’t have got off to a better start as they raced into 10-2 lead with Darius Defoe who finished with 21 points,  doing most of the damage.

Mersey  managed to cut the lead to six with Otten scoring but two buckets from Paul Gause saw the lead end at 22-14 at the sound of the first buzzer.

Hesson nailed a three to start the second period and then James Griffifths added a score for 22-19 but Defoe ensured the Eagles stayed ahead.

Otten brought them within one and a three point effort from David Aliu saw the merseysiders take the lead at 29-27. The lead changed hands frequently until  Defoe put his team back in charge at 36-33 and Joe Chapman nailed his first of seven three point shots to end the half four points in front at 39-35.

Hesson started the second half with another triple to take the lead by one but Newcastle came back with two threes from Chapman and Andrew Bridge to regain control at 50-46. The Tigers ended the quarter with six unanswered points to put Newcastle on edge leading into the final period trailing by two.

It only took another three from Aliu and a score from Otten to square the game up at 59 early in the fourth. Within a few minutes, the Tigers had gained a comfortable five point cushion with Hesson sinking his third three pointer of the night. The visitors didn’t let go of their lead from there until Chapman hit another shot from beyond the arc to bring the Eagles within two at 74-72 with just two minutes to play. But the Tigers held their nerve and went on a blistering 8-0 run to spoil Newcastle’s BBL Championship celebrations.