Guildford have re-signed point guard Albert Margai for the 2012/13 season. 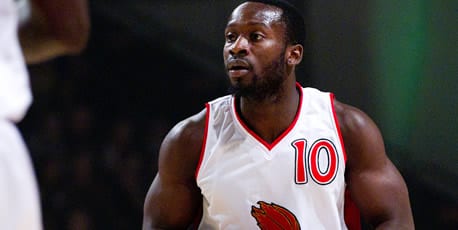 Guildford have re-signed point guard Albert Margai for the 2012/13 season.

Margai impressed during his first season in the BBL last year, averaging just under 12 minutes per game in 30 appearances.

Coach Creon Raftopoulos said: “Albert made the adjustment to the BBL with great maturity. I have selected him for the team for the forthcoming season as he has already demonstrated that he is a strong point guard who we can rely on to push the ball up the floor and help us to play at the high tempo we need. He is also a great defender, strong enough to defend positions one to three.

“Point guards new to the BBL tend to improve in their second season, having learned the style of play needed for winning performances in this league. I will be giving Albert a bigger role this season and am sure he will be an asset to the team.”

Margai added: “I am very excited to be playing for the Heat again and am looking forward to building on the positives from last season and making a good run for some silverware.”