Livas issues come and get me plea to BBL clubs

Last year’s Glasgow Rocks MVP and fan-favourite Nick Livas has issued a ‘come and get me’ plea to other BBL clubs. 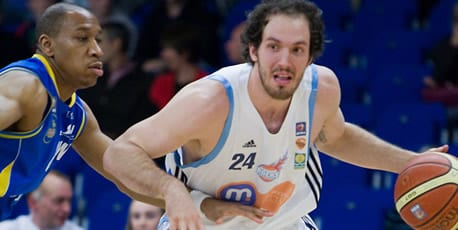 Last year’s Glasgow Rocks MVP and fan-favourite Nick Livas has issued a ‘come and get me’ plea to other BBL clubs following off-season moves that saw the Rocks opt to repatriate Gareth Murray, leaving Livas without a professional contract.

The 6’6” forward, currently back in Cary, Illinois and playing for the semi-professional Kankakee County Soldiers of the recently launched Independent Basketball Association, was a stand-out for the Rocks in his first BBL season, posting impressive stats of 13PPG, 7.6RPG, 3.3AS and 0.8BL and giving the Rocks fans no end of highlights.

Speaking of a potential return to the BBL Livas said: “The BBL is/was a lot of fun and they are getting a lot of good players to come to play in their league. I would definitely take a look at offers if a team there gave me one. I love to play basketball and thats pretty much what it’s always been about for me.”

With several players in similar situations to Livas following a number of issues affecting European basketball, he remains upbeat about the future.

He added: “[Getting a new contract] has definitely been harder than I imagined it would be, but I think that if you work hard and stay focused anything is possible and I have no doubt that whatever happens in the next few months as far as basketball goes I will land on my feet.”