MK Lions clinched the last semi final place with a comprehensive 93-65 victory over EBL side London Leopards at the Brentwood Centre on Sunday afternoon. 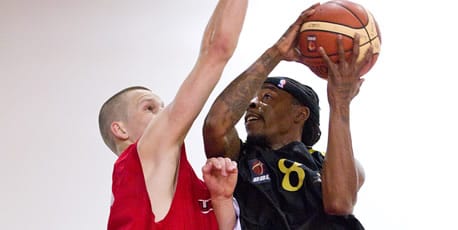 MK Lions clinched the last semi final place with a comprehensive 93-65 victory over EBL side London Leopards at the Brentwood Centre on Sunday afternoon.

The visitors led by one point after the first period but the precision shooting of Demarius Bolds and Nuno Pedroso began to take over the game. They continued this impressive offense throughout the game to exit the arena victorious.

Meanwhile, in the BBL Cup, the Glasgow Rocks were worked hard by the City of Edinburgh Kings in a hard fought 78-60 win at Kelvin Hall.

The Kings came out strong finishing the first period six points in front of their fellow Scots at 13-19. But the Rocks revived in the second quarter to spark a 9-2 burst to take the lead at 22-21. The Glaswegian side were relentless in attack from that point on as they closed out the all-important victory.

EJ Harrison led all scorers with a 22-point game followed by Mychal Green with 19. Edgars Rekis had 17 points for the Kings shooting at 60 percent from all areas.

In the early tip off, the Cheshire Jets recorded their first win of the 2011/12 BBL Championship with a 90-84 success over the Guildford Heat.

Cheshire’s Matt Schneck racked up an excellent double double with 17 points and 14 rebounds. The MVP of the game was Adam Brown who led the way with 27 points and 8 assists whilst Tayo Ogedengbe also collected 27 for the Heat.

The Jets led by 20-16 after the first quarter in a game where the lead changed many times. The home side found their form in the second quarter, running the ball well offensively to take the lead at 43-31. But the men in black sunk the last six points to trail by 43-37 at halftime.

The Jets fired their engines in the second half with Brown scoring 8 points to light an 18-4 burst to regain advantage at 55-47. The two sides rallied back and forth until a Martell McLemore three-point play tied the game at 71. But another scoring surge from the Jets late in the final minutes all-but sealed the game for John Lavery’s side.