Drew Lasker’s game winner provided the difference in a nerve wracking 80-78 win for the Guildford Heat with four seconds remaining in Sheffield on a tense Friday night. 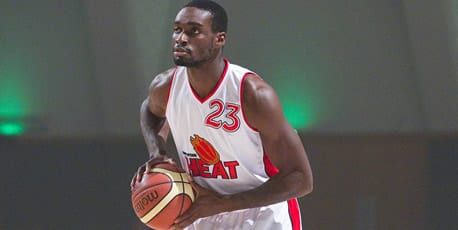 Drew Lasker’s game winner provided the difference in a nerve wracking 80-78 win for the Guildford Heat with four seconds remaining in Sheffield on a tense Friday night.

In the early exchanges, Zach Gachette scored six quick points to open up an early 8-3 advantage for the home side. The Sharks capitalised on this early  lead and pushed an 8 point stretch that took the score to 20-12 after a powerful dunk from Olu Babalola. The Heat rallied back with a 10-5 surge that saw them close the gap to three points to end the first period.

The Sharks started the second quarter dominantly and regained control of the game with a nine point lead on the back of an 8-2 run. The Heat did not panic as they composed themselves to trim the deficit back to three thanks to back-to-back triples from Julius Joseph.

Sheffield sharp shooter Nate Reinking looked to give his team a comfortable halftime lead at 43-36 but the Heat hit back again scoring five straight points to trail by two at the break.

In the second half, the visitors pushed for the lead and finally got it through a Albert Margai score. The Sharks pressed on and regained the lead at 56-49 but once again, the Heat would enjoy a strong finish to the period.

Creon Raftopoulos’ men exploded with a 13-3 burst rounded off with a score from Lasker to give them a slender lead going into the final stanza.

The two sides traded baskets in a tense few minutes only for it to be a one-shot game at 76-74 with 90 seconds on the clock. Mike Tuck tied the game with a pair from the line but Lasker sunk two of his own moments later. Advantage Heat.

The crowd were on the edge of their seats as Reinking scored to make it all square with 28 seconds left but it was Lasker who came up with the decider. Lasker was cool and collective as he drained a shot in the face of Reinking to end the game in spectacular style for the Heat.