The battle for the BBL play-offs continues when Sheffield Sharks host Cheshire Jets on Friday night. 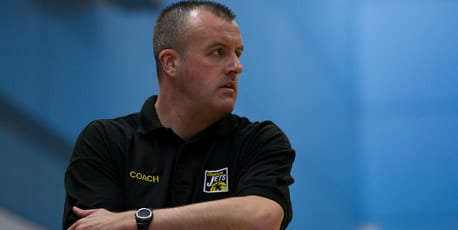 The battle for the BBL play-offs continues when Sheffield Sharks host Cheshire Jets on Friday night.

Back-to-back wins for the Mersey Tigers last weekend has blown the play-off chase wide open, and the Sharks loss to the Liverpool club has them anxiously looking over their shoulder.

They currently occupy 7th place with a 11-14 record, while the Jets desperately need a win to maintain their own play-off push.

Jets coach John Lavery said: “It doesn’t matter what’s gone on in the past, Friday’s a big game for both teams. So we just need to make sure we are ready to come to play.

“They seem to be up and down at the moment. But I expect them to come out really hard against us at Sheffield.”

It will be the fourth meeting of the season between the sides, and although Sharks have won all three of those games, they have all been close match-ups. Sharks edged home 66-62 in September’s BBL Trophy match-up and it was even closer two days later as Sheffield won 86-84 at the Northgate Arena in the same competition. The league meeting between the teams also went Sharks’ way as they ran out 90-77 winners at the EIS in early January.