Cheshire Jets put on a thrilling offensive display to upset third placed Worcester Wolves in a dramatic 87-77 victory winning the tie overall by 167-157. 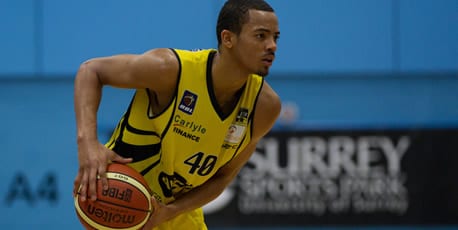 Cheshire Jets put on a thrilling offensive display to upset third placed Worcester Wolves in a dramatic 87-77 victory winning the tie overall by 167-157.

Cheshire’s triumphant success means they will face top seeds the Newcastle Eagles in the semi finals.

Delighted coach John Lavery said: “We came out tonight as an underdog but we have played hard for 80 minutes. Every one of our guys in the locker room has done a fantastic job.Last time we played Worcester, they turned us over by 30 points but we have this never say die attitude. We keep on pushing until we achieve what we want and we got the job done tonight.”

After a 14 point comeback from the Wolves late last night, the tie was level at 80-80 and all to play for.

The Jets started strongly opening up a 12-6 lead with O’Reilly  and Bill Cole swishing three point shots from deep. Worcester responded well with some three pointers of their own to lead by one at 20-19 courtesy of a huge, high arcing three from David Watts. Soon after, O’Reilly tipped in a score to tie the game at 23 and then Kai Williams nailed a triple to lead 26-23 in a tense first period.

The two teams kept trading three point buckets in the second period pushing each other to their limits.  Freeman sunk the first three to bring the Wolves within two points but Williams replied with his second of the night to keep the Jets in front at 31-28. An impressive dunk from Matt Schneck took the score out to 41-33 but the Wolves finished the half with a 6-0 burst. An acrobatic slam from Watts and another triple from Freeman saw the Wolves trailing at the break by 44-40.

in the second half, Jets sparked an 8-0 run with  Brown hitting a tough shot on the foul and adding the extra to complete the three point play. O’Reilly then sunk his third three of the night to give the hosts a 52-43 advantage. Worcester clawed their way back into the game and moments later the momentum changed. Watts drained back to back triples to see the Wolves take a one point lead at 55-54.  Prezzie-Blue hit his second three of the period and Freeman posted a score to set up a nervy final stanza with the wolves in front at 60-58.

The Northgate crowd blew the roof off the Arena as Williams leaped into the air and slammed O’Reillys missed effort down with authority through the hoop. Williams then scored from long range to retain the lead at 63-61. Nine points down and with three minutes to play, the Wolves launched another impressive fight back. Prezzie Blue knocked down two three pointers to square the game up at 74 with 2:42 to go. Brown stepped up and responded well instantly and the crowd erupted as the ball rattled its way through in another ‘and 1’ play. Brown secured the vital win as he stroked in a  shot from long range to give the Jets breathing space at 82-74 with 47 seconds on the clock.

The visitors tried to complete a turnaround but it was too late as Cole sealed the victory from the line to set up a trip to Newcastle.