Worcester coach Paul James has thrown down a challenge to Saturday’s opponents Plymouth, saying that the Raiders need to win a championship this season. 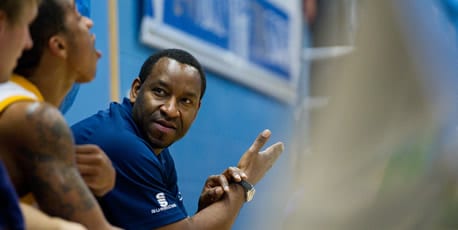 Worcester coach Paul James has thrown down a challenge to Saturday’s opponents Plymouth, saying that the Raiders need to win a championship this season.

Like the Wolves, the Raiders have made an impressive start to the season, and recently added last year’s MVP Jeremy Bell to their roster.

The pair have already met twice in the BBL Trophy, with home court advantage counting for little in both meetings, with the visiting sides going home with the win both times.

James said: “We have played the Raiders a couple of times now, losing at home then beating them away. They have put together a powerful team this season and have strengthened even further with the additions of James Jones [pictured] and now last season’s MVP Jeremy Bell. Plymouth’s intentions are clear for all to see, they need to win a championship this season.

“I have already mentioned two of the key players but then you also have to look the production of their front court, Paul Williams, Anthony Rowe and Lehmon Colbert. This could be the best combination in the league!

“We did several things very well against them last time and in particular we shot the ball well. This was something that we did not do well in our first meeting, so we need to make sure we get good looks at the basket and make our shots.”

The two team’s also meet in the BBL Cup semi-finals in a few week’s time, meaning they are both just eighty minutes away from the first final of the season.

Raiders coach Gavin Love is expecting a tough game. He said: “Worcester will have a good season, they have a very well balanced smart team who can shoot the ball well.

“Sharrad Prezzie-Blue, Richie Gordon and Tommy Freeman are all key to their success. We are one and one against Worcester, but I think both teams have improved since then. They are on a great run of six wins so it will be a very tough game at their place this weekend.”