Worcester director of basketball Paul James has praised centre Richie Gordon after he received the December Player of the Month award. 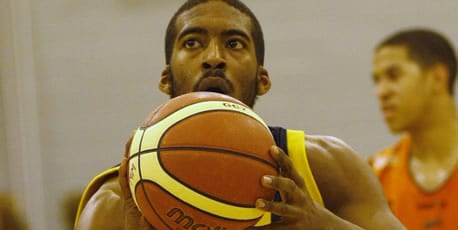 Worcester director of basketball Paul James has praised centre Richie Gordon after he received the December Player of the Month award.

Gordon enjoyed a stellar December, averaging just over 20 points and 10 rebounds per game, as he was named in the BBL Team of the Week three times.

And James was understandably thrilled about how well his first-year player is developing.

He said: “This is a fantastic award for the young man. Richie is going from strength to strength. He’s like a sponge, absorbing information and learning every day. He’s doing a fabulous job for the team, and I give my congratulations to him.”

Meanwhile, in stark contrast to his aggressive performances on court, Gordon spoke modestly about his personal contribution to the success of this season’s Worcester Wolves side:

He added: “It feels good to get an individual award, but it’s more about the Wolves being recognised for who we are as a team.”

Wolves fans will have to wait a little while to see Richie back in action: the first fixture of 2012 will be a trip to the Mersey Tigers on Friday 13 January, followed by a meeting with the Durham Wildcats at the University of Worcester the day after (tip off 7pm).