James pleased with another win

Worcester coach Paul James was pleased that his side were able to repeat last week’s success over Mersey Tigers on Friday night. 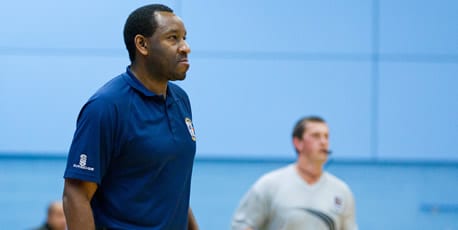 Worcester coach Paul James was pleased that his side were able to repeat last week’s success over Mersey Tigers on Friday night.

The Wolves thrashed last season’s treble winners 91-62 last week to progress to the semi-finals of the BBL Cup, and they followed that up with a comfortable 97-79 championship win, to make it seven straight wins.

James said: “It’s very hard when you’ve just beaten a team by 20 or 30 points to do it again the following week, but we did.

“Also, we wanted to conserve energy for our next game and I’m pleased we were able to do that.”

Such was the Wolves’ command that they were able to give youngster Daniel Belgrave an outing, and he landed his first basket for the senior team.

Tommy Freeman was most impressive for the visitors, landing five three-pointers, which at one point helped Worcester out to an 85-56 advantage.

Freeman added: “I’m feeling good about my shot, it’s finally coming around. I’m just trying to help my team as much as I can.”