Durham coach Dave Elderkin is sweating on the fitness of Ralph Bucci and Mike Capocci ahead of Sunday’s game against Leicester. 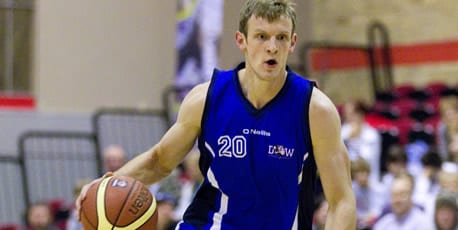 Durham coach Dave Elderkin is sweating on the fitness of Ralph Bucci and Mike Capocci ahead of Sunday’s game against Leicester.

Bucci suffered a knock to his left cheekbone and Capocci rolled an ankle in practice this week, and Elderkin will wait until the day of the game to make a decision on his bench.

Elderkin said: “Hopefully both will be fit to play and we can continue the progress we have made since the turn of the year.

“We were competitive against them at home in January for about 35 minutes, hopefully we can extend that to 40 for this weekend’s game. Having last weekend free we should be fresh but not stale – our two university games will hopefully have gone some way towards keeping our team match fit.”

Wildcats’ second win of the season against Cheshire Jets last week saw their Championship record improve to 2-14, while Riders continue to fly high in the table and Saturday’s 74-64 victory against One Health Sharks Sheffield saw them move up to third spot with ten wins from 13 games.

It will be the third and final regular season meeting between the two sides this season, with Riders having won 97-64 at home in December and 92-79 when they made their first trip to Newton Aycliffe Leisure Centre last month.

Although they won both games against the Wildcats, Riders’ coach Rob Paternostro is expecting a tough game in the north east on Sunday.

He said: “Durham have improved in many ways throughout the season, the last time we played them they were a much more difficult team to defend, their ball movement and patience on offence can be tough to play against, it is important that we stay locked in defensively for the whole possession

“Chris Pearce and Mike Capocci are both coming off big games, and I liked what DJ Glavan has given them, his ability to break down the defence has been important for them.”