Myles Hesson has received a late call-up to the Great Britain training camp as the senior men assemble in Houston. 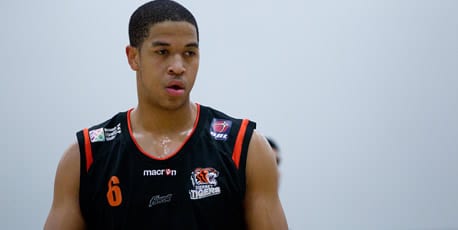 Myles Hesson has received a late call-up to the Great Britain training camp where the senior men’s side have assembled in Houston.

The 22 year old used social networking site, Twitter to announce the news last night: “Can’t believe it but I’m flyin out to Houston in the morning for GB Mens Training camp #honouredandblessed” (@MylesOnTwit).

Hesson has continued to impress since making his BBL debut with the Essex Pirates back in 2010. After an injury plagued first season, Hesson was snapped up by the treble-winning Mersey Tigers and excelled despite missing out on the play-offs. The forward was named as the Tigers’ MVP for the 2011-12 season and finished as the club’s top points scorer, averaging 14.82 points per game.

A call-up to the Futures side followed and Hesson managed to make an impression in the games against Lithuania which has led to a breakthrough into Chris Finch’s set-up. The Birmingham-born youngster will now head to Houston and join up with the likes of Luol Deng, Pops Mensah-Bonsu and Drew Sullivan.

However, the squad at the training camp has not been confirmed yet with Ben Gordon being reported as the most notable absentee as doubts grow about his commitment to the GB cause. The training squad needs to be cut to 12 for the Olympics, which begins on 29th July. Great Britain have a number of test matches ahead of the Olympics, including a showdown with the world’s best, USA, in Manchester ten days before they take on a qualifier to begin their London campaign.