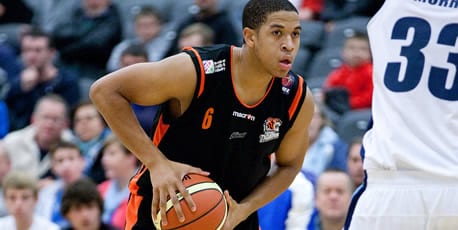 The 22 year old relished the opportunity to play alongside the likes of NBA All-Star, Luol Deng, having been a surprise inclusion in Chris Finch’s training squad in Houston. “It was a real honour to represent my country alongside some of my idols” said Hesson.

Hesson was picked to represent England against Scotland in April and was later part of Mike Mokeski’s futures roster and it was then that he was told he would be a reserve for the senior men’s training camp. An injury to Nick George opened the door for a call-up, although the news still came as a shock.

The Birmingham born forward was under no illusion about his chances of making the final 12 man roster selected to represent GB at the London games but was determined to make the most of the opportunity: “I didn’t think I’d make the team but I trained as hard as I could anyway because you never know what can happen”.

Hesson was indeed cut from the squad along with Devon van-Oostrum, Ogo Adegboye and Matthew Bryan-Amaning while Ben Gordon failed to make an appearance at camp and was subsequently not chosen.

The youngster added: “I’ve learnt a lot from the experience, I now know what it takes to play at this level and I hope to be in the set-up in years to come and make an impact when I’m ready”.

Hesson was named as the Mersey Tigers’ player of the season in his first full season in the BBL but has admitted it is unlikely he will return: “I’m currently looking abroad because I need to be playing at the highest level for my development”. The club has been openly critcised by its players in the past as financial reasons continue to cause uncertainty over their future in the BBL.