Guildford Heat left their poor run in 2011 behind as they started 2012 on a positive note defeating the Durham Wildcats 99-67 in a comfortable win for Coach Raftopoulous’ men. 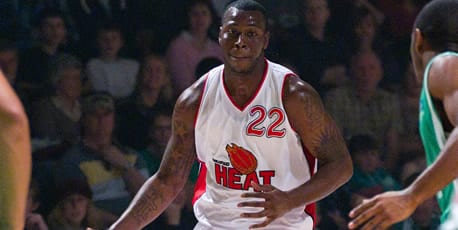 Guildford Heat left their poor run in 2011 behind as they started 2012 on a positive note defeating the Durham Wildcats 99-67 in a comfortable win for Coach Raftopoulous’ men.

Raftopoulous was pleased with the result as he said: ‘’I’m really happy to start 2012 with a win. We joked before the game that it was like going back to 2011 with Drew Lasker out injured and when he’s fully fit I’m convinced we will climb the table.’

Martelle McLemore was the high point man posting an impressive 30 point game and he was helped with contributions from Tayo Ogedengbe with 21 and Michael Martin with 17.

The Heat exploded into the first ten minutes claiming the quarter by 31-15 but the Wildcats pulled it back at 32-22 midway through the second. Guildford then reacted with an excellent run to lead 50-38  at halftime.

The Wildcats battled to salvage a positive run but it wasn’t enough for the BBL newcomers as the Heat closed out the win. Coach Raftopoulous said it was a great team performance from the heat.
“Our team defence was the key for us today. Martelle McLemore took the ball to the basket and took good threes. We had a great crowd; we fed off their energy and look forward seeing them again on January 29.”