Griffin happy to be back playing

Leicester Riders have started their holidays a while ago, but I caught with John Griffin before the players headed to enjoy the festive break. 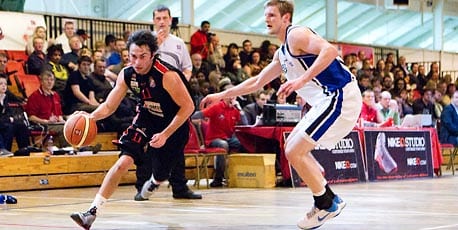 Leicester Riders have started their holidays a while ago, but I caught with John Griffin before the players headed to enjoy the festive break.

Griffin himself missed the first few months of the season due to an injury, but in recent weeks has been a crucial part of the Riders squad as they have performed well in the BBL Championship. How does he see that the season has kicked-off for the Leicester team and himself.

‘For me personally it has been good, I did have my share of ‘bumps and bruises’ that kept me sidelined for a while, but I’ve now been back for about a month and feel that I am really getting back to the swing of things on the court, as well as being extremely excited about being here in Riders. As a team – there is a lot of talent in the roster and I believe that we haven’t shown anywhere near the best of our game yet so there is a lot more to come from us.’

Griffin has played few seasons abroad, and is quick to point out the chemistry that is shared in the Riders locker-room.

‘With the bunch of players here, we really seem to get along well both on the court and outside of it and that is really important and also something quite rare when playing abroad. You don’t always find a bunch of players that really click together as players and as individuals.’

Sometimes when new players, or injured player come back into the team, it can be difficult. Riders had already played few months in the BBL before Griffin was able to join them, after his injury. With the team playing well, how was it for yourself to get into the team in mid-season.

‘To come into a system that is in place is always initially quite tough, you need to work out the chemistry on the court with your team mates and so on. But as said, these are a great bunch of players and it all went smoothly for me. Coach Paternostro is also an experienced coach in this league and he knows how to get player like myself fitted into his system of playing.

Not many teams can field as long of a bench of players as the Riders, raising even tongue-in-cheek comments that certain places need to extend their bench to the hallway when the Riders come to visit. In the game against Durham over the weekend, the Riders were able to give on court time to their whole bench – does this change things for the team.

‘We (Riders) are a really deep team, and in a game like the one against the Wildcats where the other team is a little bit tired – I think does really show. We are able to keep pushing the pace all through the game and that helps us a team.’

Many fans and pundits were looking for the Riders to perhaps make their way to the BBL Cup Final, but in the Semi-Final they faced the strong Newcastle Eagles team – how does the team move on from a result that was a disappointment for the team and the fans.

‘We have established a very high expectations for achievements for the team this season, and from my experience that is a good thing in professional sports. The higher the expectations are for the team, the harder the team will work to reach those goals set for them. What we needed after the Newcastle and Plymouth weekend was to have a good week at practice court and come strong in our last game before the Christmas break – and that is exactly what we did.’

For many of the BBL’s Americans, end of December is the one and only chance they get to visit friends and family back home – will you take the time to fly over the Pond to visit family and friends?

‘I will be flying home, and I very excited about it…’

Leicester Riders festive break will end on the 28th of December, when they make the short journey across to Worcester to face another of this seasons ‘high-flying’ teams Worcester Wolves.