Mersey coach Tony Garbelotto was proud of assistants Phil McLoughlin and Neal Hopkins, who led the Tigers to victory against Guildford last Sunday. 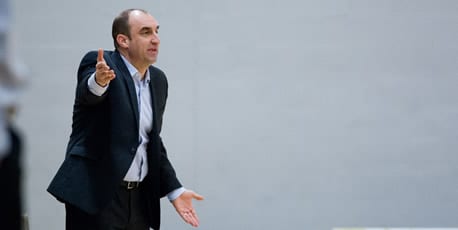 Mersey coach Tony Garbelotto was proud of assistants Phil McLoughlin and Neal Hopkins, who led the Tigers to victory against Guildford last Sunday.

Garbelotto was forced to watch from the stands after being handed a one-game suspension by the BBL, but it mattered not, as last season’s treble winners won 82-77 to keep their play-off hopes alive.

He said: “It was weird [not to be coaching] but I got lucky in two ways. Firstly, my long time mentor, Mark Dunning, came to the game and sat with me and I was able to converse with him. Secondly, I was extremely proud of my two assistants – Phil McLoughlin and Neal Hopkins, who coached a near perfect game.

“We played very well for a majority of the game. Again we were very solid in all areas, especially on the boards and in transition. No one player played well for Heat and of course that helped us towards a win. They are very talented and I am sure they will pick up big wins against some of the leagues best teams when they all fire at the same time.”

Garbelotto is back on the bench for this weekend, where the Tigers host Plymouth Raiders on Friday.

He added: “They are still one of the deepest and strongest teams in the league and still have the opportunity to win trophies.

“We played them well both times at their place but just did not have the strength in depth to really challenge them. Saying that, we have new players now in key positions, so who knows how the game will play out.”