Mersey coach Tony Garbelotto has pin-pointed his former player Andy Thomson as the key to success for Newcastle Eagles this season. 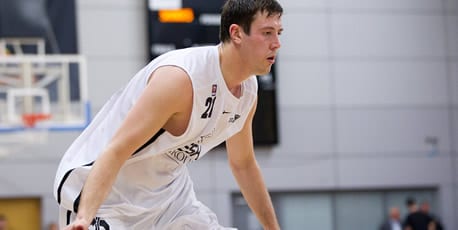 Mersey coach Tony Garbelotto has pin-pointed his former player Andy Thomson as the key to success for Newcastle Eagles this season.

The play-caller is preparing to face his ex-employers for the first time this season having been a thorn in their side last year when he led Tigers to a super treble, much to the cost of the Eagles.

Central to the success of Tigers was the form of forward Andy Thomson and having made the switch from Merseyside to Tyneside during the summer, Garbelotto believes he will be the man to fire the Eagles back to success this time around.

He said, “I can’t look past Joe Chapman and Charles Smith, but the addition of Andy Thomson has been the real key.”

“I’ve told everyone for two years he is one of the most complete players in the league and he has continued to grow.”

The Eagles are the only team yet to lose in the BBL Championship but after racking up seven wins, are preparing to come up against someone who has masterminded so many victories over them during recent times that they know securing an eighth success won’t be easy.

Garbelotto would probably be the first to admit the current Tigers roster doesn’t have the same level of talent as last year’s all-conquering team but after a tricky start, things have started to fall into place in the last few weeks.

The Tigers have racked up successive home wins against Durham Wildcats and Cheshire Jets and are hoping they can spring a surprise by extending that number to three tonight.