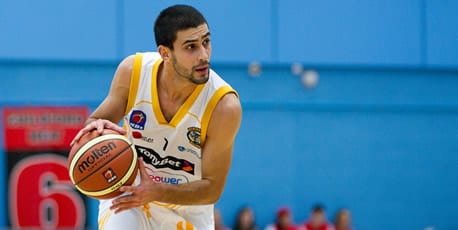 The Spaniard was in top form and finished with a super 18 points and 12 rebounds, and also claimed seven assists to get within touching distance of a stunning and rare triple-double.

Team-mate Richie Gordon also racked up a double-double by registering 20 points and ten rebounds as Wolves executed in an exciting conclusion to finally see off a pesky Lions team who had looked like they might spring a surprise.

But, as has been so common this season, there was little to cheer for Lions coach Mike New outside of the contributions of guard Demarius Bolds and centre Daniel Northern, and a lack of a convincing third scorer was where they fell short.

Worcester got off to a strong start in the game after initially falling 8-7 behind. They posted a 10-1 burst to help take command at 24-12 by the end of the first quarter.

In danger of being blown away early, Coach New needed a response from his team and he got it when they came alive with a superb start to the second period. They left home supporters stunned when they scored sixteen of the first eighteen points to not only overturn the deficit but take the lead though a basket by Nuno Pedroso.

While Gordon broke the Wolves’ drought to level the scores, the home team couldn’t find their shooting touch and barely broke double digits as the contest remained all-square heading to the locker rooms.

Wolves always looked the team most likely to make a game winning run in the third quarter, firstly moving 45-38 in front and then increasing their advantage to 59-51 after free-throws by Tommy Freeman.

However, Lions rallied and scored the last six points of the period to make it a one-shot game heading into the final quarter.

Milton Keynes looked to be done at 81-72 behind with just two minutes of the game remaining but they fought hard to recover and set up a thrilling finale. Three-pointers in the closing stages by Stefan Gill and Pedroso cut the gap to just 88-86 with thirty seconds remaining, but the home team held their nerve to score the last six points of the contest to take the win.

Prior to the game Coach New had complained that his side had been disrespected in the last encounter between the two teams back in December when Wolves took a late time out despite having already sealed the victory. A powerful dunk from Fernandez with no time left on the clock in this match will have done nothing to foster better relations.

Wolves Director of Basketball Paul James was pleased to take the win: “It’s always hard to play against Milton Keynes. They’re scrappy, they’re aggressive, they try to intimidate you. We did a great job in keeping our heads and getting a fantastic win in the end.”

As well as the impressive all-round performances of Fernandez and Gordon, there were steady displays from Tommy Freeman and Arnas Kazlauskas who scored 22 and 21 points respectively. Bolds with 33 points and Northern with 18 points dominated the Milton Keynes scoring.

Wolves travel to Durham Wildcats next Friday before returning home to the University of Worcester in two weeks’ time to face Cheshire Jets.